AMERICA/BRAZIL - In 2019, violence against indigenous communities and territories doubled 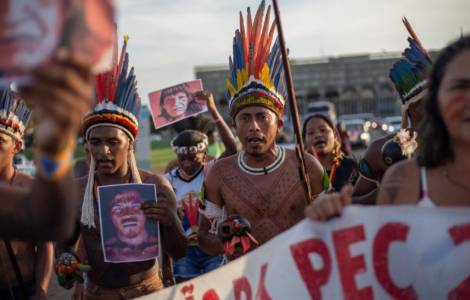 2020-10-12
Feast of Our Lady of Aparecida for the first time without pilgrims: "People feel the ever-living presence of Mary"

Brasilia (Agenzia Fides) - The Report on violence against the indigenous peoples of Brazil, prepared by the Indigenous Missionary Council (CIMI), was released yesterday, 30 September, which reiterates the portrait of an extremely worrying reality of indigenous Brazil in the first year of government of Jair Bolsonaro at the presidency of the country. The document highlights that the expropriations of indigenous lands, carried out with acts of invasion and violence, are consolidating rapidly and aggressively throughout the national territory, causing inestimable destruction.
In addition to concretizing the recognition of an original right, indigenous lands have proven to be the areas that most protect forests and their rich ecosystems. Historically, the presence of peoples within these territories has made them function as real barriers to the progress of deforestation and other looting processes. However, the 2019 data reveals that indigenous peoples and their traditional territories were explicitly usurped.
In this broad perspective of the destruction of indigenous territories, we must include the "explosion" of criminal fires that devastated the Amazon in 2019, with wide international repercussions.
According to CIMI, the violence practiced against indigenous peoples is based on a government project that aims to make their land and the common goods contained therein available to agri-food, mining and forestry entrepreneurs, among others.
Indeed, the Report underlines that, in 2019, there was an increase in cases in 16 of the 19 categories of violence cataloged by the publication. Particular attention is paid to the intensification of cases included in the category "possessory invasions, illicit exploitation of resources and property damage": from the 109 cases registered in 2018, they went to 256 cases in 2019.
Of the 1,298 indigenous lands existing in Brazil, 829 (63%) have yet to complete the demarcation and registration process, as a traditional indigenous territory, with the Secretariat of the Union Heritage (SPU). Of these 829, 536 indigenous lands (64%) are not yet taken into consideration by the State bureaucracy.
In the long report prepared by CIMI (216 pages) and sent to Fides by the Bishops' Conference of Brazil, a section is dedicated to deepening the "violence against the person". Violence against indigenous people and their communities is associated with land dispute. Among the cases registered in 2019 we find: abuse of power (13); death threat (33); various threats (34); homicides (113); manslaughter (20); intentional bodily injury (13); racism and ethnic cultural discrimination (16); attempted murder (24); and sexual violence (10); reaching a record of 276 cases of violence against indigenous peoples in 2019. This total is more than double the total recorded in 2018, which was 110. (CE) (Agenzia Fides, 1/10/2020)

AMERICA/PANAMA - Archbishop to farmers: land is sacred and cannot be sold