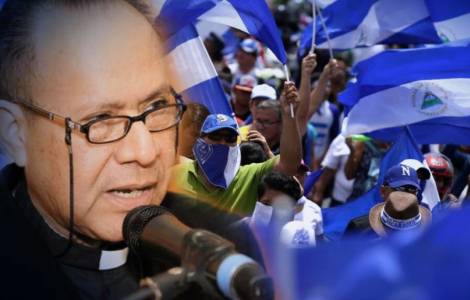 Esteli (Agenzia Fides) - Monsignor Abelardo Mata, Bishop of the diocese of Esteli and spokesman for the Nicaraguan Episcopal Conference (CEN), harshly criticized the proposal of the President, Daniel Ortega, on the latest bills because they repress the human and political rights of citizens. "With what right does he want to control the life of an entire country, when he himself is an illegitimate President? Therefore, everything he does is illegal. He has no right to be above the Constitution. He is the one who is obliged to respect the law. It is Ortega himself who has violated the law", said Mgr. Mata in an interview with local media journalists on Tuesday 29 September.
In the last 3 weeks, President Ortega has proposed three legislative initiatives to the National Assembly: the Law on hate crimes, the Law on life imprisonment, the Law on the regulation of foreign agents. On Monday 28th he introduced the special law on cybercrime, which criminalises social networks and the media in their work of informing and reporting on what is really happening in the country.
"These laws have no weight because they are vitiated by their origin, because Ortega is in power illegitimately", insisted Mgr. Mata, reiterating that everything Ortega does in the legislation "is an abuse, a legal aberration, as a government it cannot take away civil and political rights, it cannot be above what our Constitution recognizes".
In the same line of complaint, the former executive secretary of the Inter-American Commission for Human Rights (IACHR), Pablo Abrao, stressed that the new legislative initiative in Nicaragua on the so-called “cyber security” opens a way to criminalize citizens and journalists. National experts say the law aims to "censor and criminalize social networks and journalism".
According to data collected by Fides (http://omnisterra.fides.org/articles/view/95), social networks have played a decisive role in what is called the "peaceful insurrection" in Nicaragua, which began in mid-April 2018 by university students (see Fides 4/6/2018) then followed by the whole population (see Fides 8/6/2018). Hundreds of young people, summoned by social networks, began to demonstrate in front of a university and then in the streets of Managua. After the violent reaction of the government, young people began, again through social networks, to photograph and record the repression, sharing the images with those who did not know what was happening. In a few hours the whole population had photos or videos of the violence on their phones. Social networks in Nicaragua have become the media par excellence today. (CE) (Agenzia Fides, 1/10/2020)