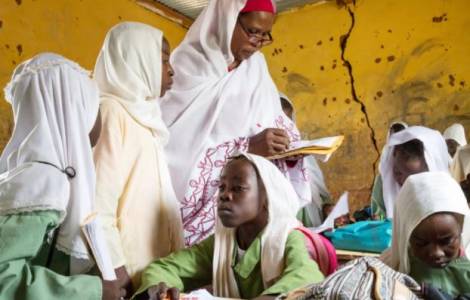 Khartoum (Agenzia Fides) - "The agreement on the separation between State and religion, signed by Prime Minister Abdalla Hamdok and the leadership of the Sudan People's Liberation Movement-North (SPLM-N) is certainly good news for the Country. I believe, however, that even before the sound of treaties, revolution is brought about by changing mentalities through education. In this sense, I think it is very important that, according to what the government announced, school books for the new year - which has been officially postponed by two months due to the recent Nile floods, actually due to delays in the printing of books, ed - will be free from references to the Koran in every subject of study. This will bring about a huge change because until last year the Koran was the basis of all school subjects. The new Ministry of Education wanted to change course stating that the Koran will rightly be taught in the curriculum of Islamic religion, but will not be mentioned in the other subjects".
This is the comment released to Agenzia Fides by Father Diego Dalle Carbonare, a Comboni missionary in Khartoum, on the recent agreement that could lead to a progressive distancing of the State from the "sharia", Islamic law. In the first week of September, the SPLM-N rebels, well established in the Nuba Mountains region where the Christian presence is very significant, reached an agreement with Prime Minister Abdalla Hamdok on the separation of State and religion. Developments are now awaited.
"The road is long, says Father Dalle Carbonare, also because it is necessary to take into account that, as far as the rebels are concerned, the agreement was only signed by one group (which had not signed the peace agreement concluded at the end of August, ed). In relation to the government, the signing is only made by the Prime Minister, not by the Supreme Council, which already on other occasions - such as on the question of whether or not to reopen relations with Israel - pointed out that certain decisions do not belong to the executive. According to observers, the power to make a constitutional change such as the abolition of the Sharia law does not belong to a transitional government".
On the other hand, however it is also noted that Nimery introduced the Islamic law in 1983 without the legitimacy of parliament or a referendum. Therefore, a constitutional mandate to repeal it would not be necessary legally.
"In any case, I would pay close attention to the terminology when dealing with this very delicate problem. In the Arabic-speaking world, the word "secularism" does not have a neutral meaning as in the West, but has a negative meaning. It is understood as 'a minus', not a 'plus'. When the rebels say: 'Either you give us the full secularism of the State or it will secession', they are putting the Arab part of the country in a difficult situation and the whole process in danger. In my opinion, it would make much more sense to talk about a reform of the law to give space to plurality and protect minorities: that way, the same objective would be achieved without unnecessary tension".
Furthermore, after more than a year and a half, there is again an apostolic Nuncio in Khartoum. The new diplomatic representative of the Holy See, Archbishop Luís Miguel Cárdaba has finally arrived in Sudan. His arrival, following the appointment of Pope Francis last March, comes at a critical time for the Country. The Comboni missionary remarks: "Precisely in these days the new Apostolic Nuncio has arrived in Khartoum. The absence of a year and a half was felt, especially as in the meantime, epochal changes were taking place here in Sudan. I believe that his presence now can be very important. For a long time the Church lived in the shadows, without the possibility of dialogue with the government. In this new political and social climate, there is a historic opportunity for the Church to play an important role and I sincerely hope that the new nuncio will be of help in this direction". (LA) (Agenzia Fides, 29/9/2020)

ASIA/PAKISTAN - Interreligious meetings and closeness to the poor: the spirit of Christmas

ASIA/INDONESIA - Regional elections: the Bishops urge to vote wisely and to pay attention to pluralism and the common good