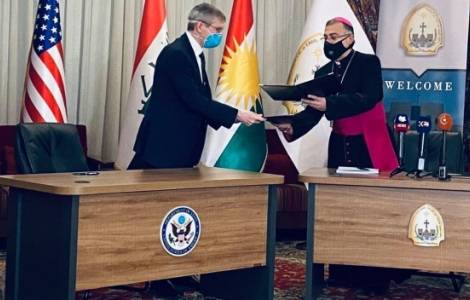 2021-01-21
Patriarch Sako on the massacre in Baghdad: message of death, perhaps the electoral project is also in the crosshairs

Erbil (Agenzia Fides) - The fund allocated by US foreign policy to a charitable organization promoted by the Chaldean Archbishop of Erbil, Bashar Warda, to assist Christian refugees displaced since 2014 in the capital area of the Autonomous Region of Iraqi Kurdistan, after having abandoned their homes in Mosul and in the villages of the Nineveh Plain in the face of the offensive of the jihadist militiamen of the self-proclaimed Islamic State (Daesh) amounts to almost two and a half million dollars.
The ceremony to formalize the donation to the charitable organization, Ankawa Charitable Association, took place on Thursday 24 September in the church of St. Joseph in Ankawa, a suburb of Erbil, and saw the participation of Archbishop Warda himself and the Usa Consul General in Iraq, Rob Waller (see photo). The disbursement of the substantial contribution - reports ankawa.com news site - follows the meeting between Archbishop Warda and the US Ambassador to Iraq, Matthew Toller, which took place in Erbil a few weeks ago. Already at that meeting, the US Representative had reported that part of the $ 204 million recently allocated by the US to support Iraq would be reserved for the Ankawa Charitable Association to support Iraqi Christian refugees.
At least 2,500 Christian families live in precarious conditions in the Erbil area, concentrated in the suburb of Ankawa, and for the time being they do not seem willing to return to their homes in Mosul and in the Nineveh Plain, which have long since been removed from the control of jihadist militias.
On 11 December, Archbishop Bashar Warda had attended the White House ceremony in which US President Donald Trump had signed the "Iraq and Syria Genocide Relief and Accountability Act of 2018" (see Fides, 12/12/2018), the law that recognized the series of violence perpetrated in recent years by jihadist groups against Christians and Yazidis in Iraq and Syria as "Genocide". That law committed the United States government to provide humanitarian assistance to groups who were victims of the violence and to prosecute those responsible and perpetrators of the brutalities.
The ceremony for the signing of the US President was attended, among others, by the Chaldean Archbishop of Erbil, also the Supreme Knight of the Knights of Columbus Carl Anderson, the US Ambassador to the Holy See Callista Gingrich and Archbishop Timothy Broglio , Military Ordinary in the United States of America.
The law also promoted US financial assistance for projects in favor of religious minorities in Iraq and Syria.
Previously, Chaldean Patriarch Louis Raphael Sako had pointed out in an interview that "in recent years Christians have suffered injustice, violence and terrorism in the Middle East. But this also happened to their other Muslim Iraqi brothers, and to those of other religious faiths. We must not separate Christians from others, because in that way the sectarian mentality is fuelled". (GV) (Agenzia Fides, 25/09/2020)