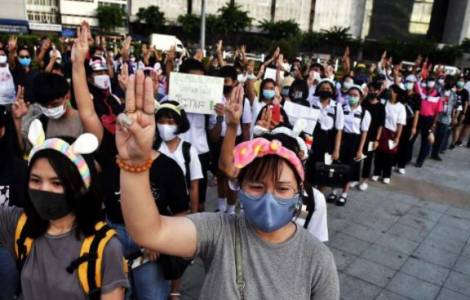 Bangkok (Agenzia Fides) - Thailand is enveloped in social and political tensions that involve, in a special way, the world of young people and that could determine a new state structure and therefore the future of the country. Yesterday, Parliament examined and debated six motions with amendments to the Constitutional Charter, in response to student protests that have been crossing the streets of the capital and several other cities for months. The last one, on Saturday 19 September, saw over ten thousand demonstrators take to the streets, joined, for the first time, also by parliamentarians from opposition parties and citizens, not only young people. However, yesterday Parliament postponed the vote: 431 parliamentarians and senators chose to delay the vote; 255 opposed who chose to leave and joined a few thousand protesters crowded in front of the legislative assembly building. Among the amendments, the one formulated by the parties that form the governing coalition proposed that the first two chapters of the Charter (part of the first and the second concern the powers and role of the monarchy) should not be touched. The opposition, led by the Pheu Thai and Move Forward parties, instead wants not only that the two chapters to be subject to revision, but that a reform of the Senate, currently not elected but chosen by the Armed Forces, to be voted on. In the meantime, an "ad hoc committee" has been formed, but the opposition deputies have chosen not to participate: it consists of 31 parliamentarians - including 15 senators - who belong to the parties of the coalition that supports the government of Prime Minister Prayut Chan-o-Cha.
The movement, which began to move already in 2019 after the general elections, took a breather in February 2020 when the Future Forward Party was dissolved from the judiciary and its leader expelled from Parliament, due to a series of legal quibbles. After a sort of pause linked to Covid-19, given the ban on street gatherings, the protests resumed in mid-July, culminating on 10 August in the public reading of a ten-point manifesto calling for the resignation of the premier and a new Constitution. The Movement, made up mostly of young people, has also targeted the monarchy, asking that its role to be downsized, that is, interference in national political affairs.
The youth movement, which has expanded popular support since last Saturday, has already recognized leaders born above all in the classrooms of the Thammasat University in Bangkok and likes to define itself generically as "Free Youth Movement". It already has its icons: the three-fingered salute (mediated by the “The Hunger Games” saga); the Monument to Democracy in the center of the capital, which is now the starting point of the protests; and a symbol that links them to those of Taiwan and Hong Kong, or the so-called “Milk Tea Alliance” which has a cup of milk tea as its icon. For now, the government has reacted cautiously, without violence: the police, deployed yesterday as well, did not intervene. But the postponement of the vote on the amendments will give new life to the movement that has already called a general strike for mid-October. (MG-PA) (Agenzia Fides, 25/9/2020)