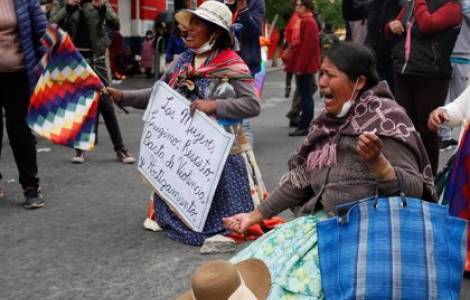 2020-10-08
Caritas and student pastoral care: "Free elections under the sign of peace and democracy"

2020-09-22
"Being a politician according to the Gospel": reflections in time of elections and in the midst of the pandemic

2020-09-14
Mgr. Arana: "It is urgent to build a culture of reconciliation, politicians must avoid clashes in this pre-electoral period"

La Paz (Agenzia Fides) - "Being a Christian politician implies a commitment above all to Jesus Christ: in discipleship, following and in the mission of rebuilding today's society, according to the heart of God. Belonging to a political party is nothing else than an instrument to achieve good for all members of society, which is the end of any political act", reads the statement of the Social Pastoral relaunched by the Bishops' Conference of Bolivia.
The text is part of a short series of reflections on the current situation in the country, under the title "Being a politician according to the Gospel", reflections in time of elections. It constitutes an important contribution in the face of the situation of division among parties and confusion in the population.
The text states: "Violence, disrespect for the dignity and freedom of those who think differently, are not part of political action. There is no room for division in political factions, attacks and hatred between them. A Christian, rather than engaging or taking sides on one political side or the other, must commit and take sides with the Gospel of Jesus Christ. The Christian in the world of politics must be a witness and prophet of the will of God who wants reconciliation, unity, dialogue, respect for every person. Our ultimate task is to serve God, by serving our brothers; to love God, to love our brothers".
As the text explains, these reflections are offered because we witness scenes of processions of political candidates, "with verbal and physical attacks by some against other supporters of the party; political breakups, alliances and ties; negotiations to cover some people and their actions; statements and accusations between candidates who seek to destroy 'the opponent'; demonstrations of the old political logic, according to which 'what we cannot take, what we cannot bring to our party, must be destroyed'."
Bolivia is heading towards the presidential elections, next October 18, in the midst of a political crisis and the Covid pandemic. According to agency data, the candidate of the MAS party, Luis Arce, leads the preferences with 29%, Carlos Mesa follows with 19% and then the others. It must be remembered that this new date of 18 October is the result of the electoral fraud of October 2019 and the formation of the subsequent transitional government led by Jeanine Anez, interim president of Bolivia, who has just withdrawn her candidacy. (CE) (Agenzia Fides, 22/9/2020)

AMERICA/NICARAGUA - Bishop of Matagalpa: "The future of our country is at stake"