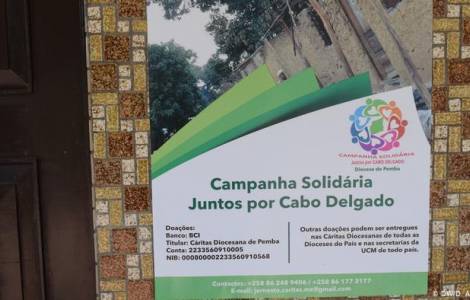 2020-11-19
Bishops close to over 500,000 displaced from Cabo Delgado because of the violence, launch an appeal for dialogue

2020-11-12
The governor of Cabo Delgado denies the beheading of 50 people; the Bishop of Pemba reiterates: "dramatic situation"

2020-11-04
After attacks on villages in the north of the country: 40 refugees die in a boat accident

Maputo (Agenzia Fides) - "Together for Cabo Delgado". This is the international solidarity campaign launched in July by the diocese of Pemba, in the province of Cabo Delgado, in the north of Mozambique, devastated by the violence of the jihadists and by the counter-reprisals of the military and of the security forces.
The Bishop of Pemba, His Exc. Mgr. Luiz Fernando Lisboa, says that the solidarity campaign "is growing because more and more people are becoming aware of what is happening in Cabo Delgado".
"Solidarity from individuals and groups is growing. Many people have organized themselves into groups to help the victims of the crisis in Cabo Delgado", said Mgr. Lisboa.
Through the campaign, the Bishop says, various groups have offered assistance including "a group of ladies in Maputo, a group of young people nationwide, a group of businessmen".
The diocese has launched an appeal for the collection of food, clothes, mats and blankets to help thousands of displaced people. The rebel attacks have already displaced over 250,000 families, seeking refuge in other districts of the province of Cabo Delgado and in the neighboring provinces of Nampula and Niassa.
Most of the families are concentrated in Pemba, the provincial capital, in the homes of family members and acquaintances. However, it is impossibile to meet everyone's needs.
When presenting the campaign, Mgr. Lisboa reported that the initiative aims to strengthen the actions of the authorities and other humanitarian organizations in response to the humanitarian crisis.
"Not only are the displaced people in a very difficult situation, but also the districts that host the displaced, the welcoming families, the authorities, in short, the entire province of Cabo Delgado has been affected. And why not say that the whole country, Mozambique, is hit. We thought it would be good to launch a campaign in our Country, in the diocese of Pemba, to sensitize Mozambicans on the situation in Cabo Delgado".
Meanwhile, international humanitarian organizations have denounced the violence committed against civilians by regular soldiers, after the appearance of a video in which a woman is brutally killed by men in army uniform. "The Mozambican authorities must immediately launch an independent and impartial investigation into the extrajudicial killing of a defenseless naked woman in Mocímboa da Praia, in the province of Cabo Delgado", said Amnesty International, after verifying the video footage of the attack which was shared on social media. (L.M.) (Agenzia Fides, 18/9/2020)

AFRICA/ERITREA - War in Ethiopia: the appeal for peace of Catholic Bishops in Eritrea