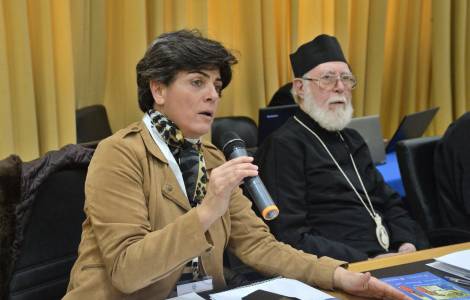 2020-10-14
Maronite Patriarch: Negotiations over sea borders do not represent "normalization" of bilateral relations with Israel

2020-09-22
Towards Mission Sunday - The National Director of the PMS: "Become messengers of peace and mercy"

Bkerké (Agenzia Fides) - The Executive Committee of the Middle East Council of Churches (MECC) meets today Friday 18 September in Bkerké, at the headquarters of the Maronite Patriarchate, to elect the new Secretary General of the Council, called to succeed Lebanese professor Souraya Bechealany, who has reached the end of her term.
Due to travel difficulties caused by the COVID 19 epidemic, only the members of the Executive Committee resident in Lebanon and Syria will be physically present at the meeting, including Maronite Patriarch Bechara Boutros Rai, Patriarch of Antioch of the Greek Orthodox Yohanna X and Syrian Orthodox Patriarch Ignatius Aphrem II. The other members of the Executive Committee, including Coptic Orthodox Patriarch Tawadros II and Chaldean Patriarch Louis Raphael Sako, will participate in the meeting via videoconference.
About thirty churches and ecclesial communities are members of MECC, that belong to four different “families”: Catholic, Orthodox, Eastern Orthodox and Evangelical. The new Secretary General, following the rotation criterion, will be a member of a Greek Orthodox Church. The Executive Committee will also be called upon to rule on the proposal to appoint, as Coadjutor to the new secretary, Melkite Catholic priest and theologian Gaby el Hachem, currently Director of the MECC theology and ecumenical relations department, a close collaborator of outgoing Secretary Souraya Bechealany, also to guarantee continuity in the work of the ecumenical body. Before the election of her successor, Souraya Bechealany will present her final report to the participants at the meeting, with not at all obvious considerations on the condition of Christian communities in the Middle East, critical evaluations on the work done in recent years by MECC and suggestions aimed at improving its operation.
The Middle East Council of Churches, founded in 1974 in Nicosia and currently based in Beirut, has the purpose of facilitating the convergence of Middle Eastern Christian communities on issues of common interest and favoring the overcoming of confessional conflicts.
Professor Souraya Bechealany (in the photo), a Maronite Christian, teaches theology at the Université Saint-Joseph de Beyrouth. Souraya was elected Secretary General of MECC in January 2018, and together with her collaborators undertook a process of restructuring the departments of the ecclesial body. On 2 September 2019, a delegation from MECC led by Souraya Bechealany was received in the Vatican by Pope Francis (see Fides, 3/9/2029), and on that occasion the Lebanese professor wanted to emphasize that Christians of the Middle East "are not minorities and they don't need any protection". While "with their own testimony they are building bridges with their fellow travelers of all religions, in the region and throughout the world". (GV) (Agenzia Fides, 18/9/2020)

AMERICA/GUATEMALA - The Bishops: "may this new period of national life be an opportunity to build a different Guatemala"