AFRICA/NIGER - Two years after the kidnapping of Fr. Gigi Maccalli: "There is always, somewhere, someone who betrays friends" 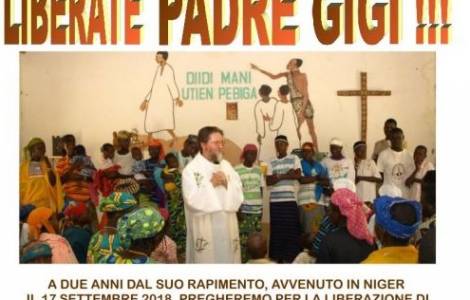 Niamey (Agenzia Fides) - "It was night when they took you away and since then two years of darkness have passed, only interrupted by a short video message on 24 March, the first and for now the only sign of life. There have been testimonies, stories, hypotheses, inquiries and perhaps negotiations, we know little about all this". Thus writes to Agenzia Fides Father Mauro Armanino, priest of the Society for African Missions, Fr. Gigi Maccalli’s confrere, kidnapped in Bomoanga on 17 September 2018.
The missionary addresses a particular thought to his confrere/friend recalling one of the many shared events. "Dear Gigi, when we had a car accident in Padua, we stayed in the same hospital for a few days. You sent me a handwritten note apologizing for what happened. Who knows why this detail came back to my mind, on the second anniversary of your kidnapping by strangers, on the night of September 17. It may be because of that surgical miracle that rebuilt the injured parts of your body, and the forced immobility that had strangely prepared you for your current imprisonment", said Fr. Armanino.
The missionary recalls another episode in his thoughts in which he says: "Hundreds of pilgrims were returning from Mecca at the same time and priority was given to them when leaving Diori Hamani airport in Niamey. While waiting for your plane, I thought of my first arrival in the country, in April 2011, where you welcomed me and accompanied me to the house where I have lived ever since. Your room was number two. There you left your things in the metal closet for fortnightly visits, intended for the purchase of what is necessary to live with dignity in Bomoanga, more than 130 kilometers from Niamey, in the semi-desert area. You always brought news from the depths, from the poor farmers and of the small and fragile hopes that you tried to share with us through projects of careful integral humanism. You slept in that room for the last night before leaving for your area and, together with some friends, we had dinner in Niamey's Italian restaurant, the well-known 'Pilier'. The ambassador had offered us what, commenting with him and others, would have been our last dinner before the drama. Everyone was present at that dinner. The poor, the children you took care of, the little girl who died at the 'Bambin Gesù' hospital in Rome in a desperate attempt to save her, animators, families, the young people you helped, together with others, to continue their studies or professional training. Perhaps there was also a Judas among them. There is always someone somewhere who betrays friends, who probably informed, consciously or not, the kidnappers about your return and your evening habits. It was night and those who later kidnapped you knew that you did not immediately close your bedroom door. People came to look for medicines for emergencies which, in a remote village and without social services, are always lacking. They knew that there was a light and a door that opened with the smile of hope now at hand".
Father Armanino continues to pray for his confrere recalling "the last night in Bomoanga, which is not even found in the most sophisticated Google maps, the last or almost the last of small villages with no future other than what he and the Christian community were trying to offer. A middle school, a possible boarding school and above all the need to offer reasons to stay in place with dignity". (MA/AP) (Agenzia Fides, 15/9/2020)