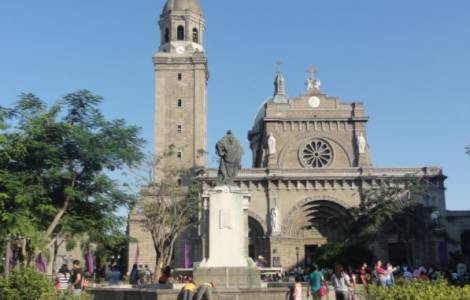 2020-09-26
Christians and Muslims deepen their faith: the initiative of the "Silsilah" movement

2020-09-15
Cathedral in Manila reopens, cemeteries close to commemorate the dead

Manila (Agenzia Fides) - The Cathedral of the Immaculate Conception in Manila, in the heart of the area of Intramuros, reopens to the public and to worship on Wednesday 16 September after six months of closure due to the coronavirus pandemic. As reported by the communications office of the Archdiocese, the reopening of the basilica is part of the easing of restrictions for religious gatherings in Metro Manila announced by government authorities. Currently, churches that fall into areas under "community quarantine" can only admit up to 10% of their usual capacity. In the Cathedral - which normally can accommodate up to 800 faithful - 80 people will be admitted for the celebrations, confirmed Fr. Kali Pietre Llamado, vice rector of the Cathedral. During Sunday mass, the faithful can also stop in the square in front of the church, where the Eucharist will be distributed. Masses will still be broadcast in live streaming through the cathedral's Facebook page and YouTube channel.
On the other hand, the Philippine government has issued a directive prohibiting visits to cemeteries during the Christian feast of All Saints and on the day of the commemoration of the dead, 1 and 2 November. The measure, adopted to prevent the spread of COVID-19, was announced by the undersecretary of the Ministry of Health, Maria Rosario Vergeire, who motivated it "for the common good and for health reasons".
"We know that during All Saints' Day, the cemeteries are really crowded with people. It is our task to avoid mass gatherings", Vergeire said. The mayors of the cities that make up the metropolitan region of Manila have announced this in advance so that residents have the opportunity to visit the graves of their loved ones in other moments, and not all together on the same day.
Manila was among the first to order the closure of cemeteries from October 31st to November 1st. Members of the Metro Manila Council, made up of 17 mayors from the metropolitan city region, unanimously agreed to close all private and public cemeteries in their respective areas to prevent gatherings and not to increase the risk of virus transmission. All cemeteries will be closed for a week, but cremations, burials or other funeral services will be allowed. Traditionally, more than 2,000 men are employed throughout the metropolis for the safety of thousands of people who go to pay homage to their loved ones in the first days of November.
Speaking to Fides, Margaret Mararac, a Catholic woman from Manila, agreed on the necessary caution: "The government only wants to prevent gatherings. We can always pray at home and visit the cemetery on other dates".
It should be noted that, given the enormous poverty in the degraded suburbs of the metropolitan city and the chronic shortage of housing and housing areas, cemeteries sometimes also become places where entire families of occupants settle. The "Cemeterio Del Norte" - an ancient cemetery opened in 1904 - in Metro Manila is permanently inhabited by an entire community of homeless, unemployed, destitute, people wanted by the police, prostitutes and laborers who rank among the poorest in the nation.
The city of Cebu, in the central Philippines, has also ordered the closure of cemeteries. (SD-PA) (Agenzia Fides, 15/9/2020)