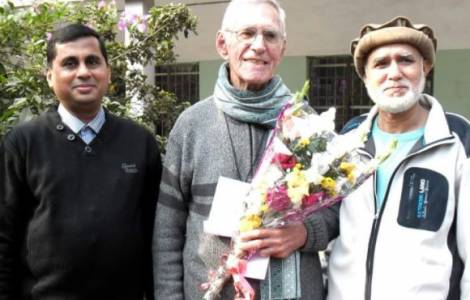 Dhaka (Agenzia Fides) - His life as a Catholic missionary in Bangladesh is considered legendary: Father Richard William Timm (1923-2020), American Catholic priest and religious of the Congregation of the Holy Cross (CSC), was an educator and scientist who dedicated his whole life to the proclamation and witness of the Gospel in Bangladesh. The missionary died on 11 September, in the house of the Congregation of the Holy Cross in Indiana, in the United States, where he had returned due to health complications. He passed away at the age of 97, 66 of which spent on a mission in Bengal.
The fathers of the Congregation of the Holy Cross in Bangladesh expressed their condolences for the death of Fr. Timm. "We are deeply saddened by his death. He was a pillar of the mission", said brother Ujjal Placid Pereira, CSC, to Fides. Father Swapon Das, CSC tells Fides: "Fr. Timm was a pioneer and faced many challenges: we will always remember him for his courageous and prophetic contribution".
Fr Hemanto Rozario, CSC, Dean of Notre Dame College in Dhaka recalled: "Fr. Timm was at the helm of Notre Dame College and, for his extraordinary educational contribution, a six-story building of the College was named after him in 2015. Fr. Timm lived in Bangladesh for more than 66 years and set an outstanding example of love and service in the field of education and social justice. He was known as a scientist, teacher, intellectual, social worker, speaker, writer and most of all as a man with a great soul. Fr. Timm touched the lives of many students and the people of Bangladesh. He will be remembered for many years to come".
Many lay leaders remember him with affection and esteem. Apurbo Mrong, director of Caritas in Mymensingh says: "We have lost a great man. He was an educator, zoologist, scientist and active participant in the social development work for Bangladesh. He dreamed of and contributed to the realization of Caritas Bangladesh". Another Catholic Leo Costa tells Fides: "The whole nation, not just the Catholic community, remembers and appreciates his contribution of a whole life given to the country".
Fr. Timm was born on March 2, 1923 in Michigan City, in the state of Indiana, USA. He was one of the founders and the sixth dean (1970-1972) of Notre Dame College in Dhaka, Bangladesh. As a biologist, he h conducted research and led numerous scientific expeditions to South Asia. In addition, as a human rights activist, he was the coordinator of the Human Rights Council in Bangladesh (CCHRB) and the South Asia Human Rights Forum (SAFHR). He told and expressed his vision on the Bangladesh Liberation War (1971) through his writings. He was the founder and executive director of Caritas Bangladesh and director of the "Justice and Peace" Commission, within the Catholic Bishops' Conference. He is considered one of the main animators of the local Church and also of Bangladeshi civil society. He received honors and awards for his commitment to the common good from three different Bangladeshi governments. (FC-PA) (Agenzia Fides, 14/9/2020)

AMERICA/NICARAGUA - Family, freedom, dignity and social justice: the pillars on which to build the country