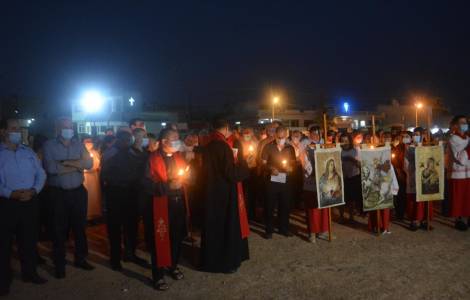 Teleskof (Agenzia Fides) - The persistent difficulties following the jihadist invasion of 2014 and the new problems linked to the spread of the Covid-19 pandemic have not prevented Christians of the Nineveh Plain from celebrating the Feast of the Holy Cross, a liturgical solemnity particularly dear to the popular devotion of the Christian communities of that region. On the evening of Sunday 13 September, Christians from Teleskof (Tesqopa), 19 miles north of Mosul, gathered at the Chaldean church of Mar Gewargis (St. George), to take part in mass and then in the procession with candles and torches that wound through the streets of the city up to the so-called "Bishop's Hill".
Dozens of Christian families from Talkaif, Batnaya, Baqofah and even Mosul also took part in the celebration, who during the years of the jihadist invasion had found refuge in Teleskof, and have not yet returned to their homes. After the cases of contagion from Covid 19 also registered in the cities and villages of the Nineveh Plain, preventive measures were put in place to ensure that the celebration of the Holy Cross could take place in complete safety from a health point of view: before entering the church, body temperature was measured and the use of a mask and hand sanitation was prescribed. At the end of the procession, in front of "Bishop's Hill", torches placed to illuminate the top of the hill were lit.
In recent years, liturgies, processions and moments of popular devotion in honor of the Holy Cross have represented a concrete manifestation of the resumption of community life, after the years in which most of the cities and villages of the Nineveh Plain, once inhabited mainly by Chaldean, Syrian and Assyrian Christians, had emptied due to the occupation of the militiamen of the Islamic State (Daesh).
In 2015, as reported by Agenzia Fides (see Fides, 14/9/2015), in the city of Al Qosh, the procession for the solemnity of the Holy Cross was experienced as a sign of hope for all Christians of the Nineveh Plain. "With this procession, and with clearly visible external signs that accompanied it" said to Agenzia Fides Iraqi Syrian Catholic priest Nizar Seeman, "the Christians of al Qosh also sent a moving signal, that challenges us all. They wanted to say, we are still here, even if no one protects us, because we have faith that we are protected the Lord Jesus, with Mary his Mother". (GV) (Agenzia Fides, 14/9/2020)

AFRICA/MOROCCO - "There is still a lot of fear, but finally our churches have reopened!"

AMERICA/NICARAGUA - The Archbishop of Managua postpones the feast of Santo Domingo, the feast of the capital, due to the pandemic