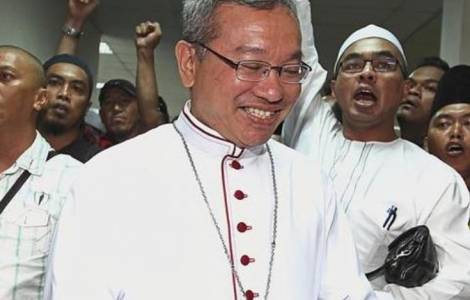 2020-10-16
Catholic schools: tools for evangelization and human development, in partnership with the government

2020-09-18
Interreligious celebrations and prayer for the nation: all united in the fight against the pandemic

2020-09-09
A Bishop in the National Unity Plan Committee, "to build harmony and the common good"

Kuching (Agenzia Fides) - "I live this appointment as a service to the common good to help the government promote peace, harmony, understanding, solidarity and work for development": as Agenzia Fides learns, with these words the Archbishop of Kuching, Msgr. Simon Peter Poh Hoon Seng, welcomed the appointment as member of the special Federal Committee for National Unity Action Plan (2021-2025). The Archbishop is one of the 20 representatives of Sarawak, the only state of the Federation of Malaysia that is of Christian majority. The special Government Committee, made up of leaders of civil society, politicians, prominent personalities in the world of culture and religion, has the task of assisting and supporting the Ministry of National Unity (Kementerian Perpaduan Negara) in its action to strengthen the harmony among citizens in Malaysian, multicultural, multi-ethnic and multi-religious society. The Committee is in line with the government's aspiration to consolidate national unity as the foundation of Malaysia's economy, politics and social stability.
The Malaysian government recently launched a special popular poll among citizens to collect opinions on the National Unity Action Plan (2021-2025), with the aim of collecting contributions and ideas to apply the principles of "Rukun Negara" and with the intention of having suggestions on programs, initiatives and activities suitable for promoting unity. The document of "Rukun Negara" ("National Principles") is the declaration of the philosophy behind the nation, approved since the proclamation of "National Day" in 1970. Mgr. Seng was, alongside government officials, responsible of NGOs, heads of associations, among those who participated in the launch and illustrated the aims and objectives of the popular survey: the intention is to involve civil society as much as possible, with a capillary action so that the "Plan for unity" is not perceived as "lowered from above", but becomes a real expression of a popular will.
Sarawak is the largest state in the Federation of Malaysia. Located on Malaysian Borneo, it covers an area almost equal to that of Peninsular Malaysia. The capital, Kuching, Sarawak's largest city, is the economic center of the state and the seat of government of the Sarawak state. It is a state characterized by ethnic, cultural and linguistic and religious pluralism. The main ethnic groups are Iban, Malay, Chinese, Melanau, Bidayuh and Orang Ulu. Sarawak's population was 2.6 million (2015 census). Sarawak is the only state in Malaysia where Christians (42.6%) are more numerous than Muslims (32.2%). Other religious communities profess Buddhism, Hinduism, traditional cults or animists. (SD-PA) (Agenzia Fides, 9/9/2020)