AMERICA/BRAZIL - Independence Day: "seeing the many riches that exist in our differences" 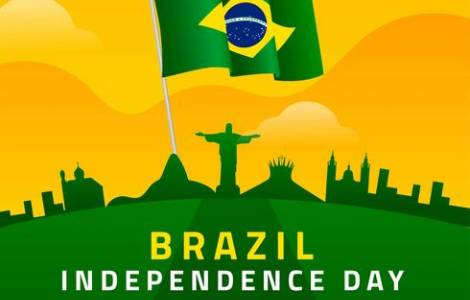 2020-10-12
Feast of Our Lady of Aparecida for the first time without pilgrims: "People feel the ever-living presence of Mary"

Brasilia (Agenzia Fides) - "Independence Day should not be experienced as a simple holiday, but as a moment to celebrate the belief that all Brazilians, each with their own difference, depend on each other. A better, more just and more fraternal country cannot be built with hostility, with actions that seek to destroy others". This was stated in a video message for the Independence Day of Brazil, which is celebrated today, 7 September, by the President of the National Conference of Bishops of Brazil (CNBB), Mgr. Walmor Oliveira de Azevedo of Belo Horizonte. In the message, sent to Agenzia Fides, the Archbishop reiterates the importance of democracy and citizen participation as paths that allow differences to be articulated and become wealth in the construction of the present and the future of Brazil, as a response to the challenges posed by the Coronavirus.
"We are celebrating an Independence Day marked by grief and many diseases", underlines the President of the CNBB referring to the Covid-19 pandemic, and urges: "This challenging moment that we are facing will not win against the Brazilian society which is strong, which knows how to fight and has overcome many other adversities. In the end, life always wins, is what the Master Jesus shows us… Together we will build a new era based on the strength of solidarity".
In his message, Mgr. Oliveira de Azevedo denounces the hostile climate created by the spread of aggression, through social networks, which distance us from fraternity, respect for differences and dialogue. "The culture of responsible participation and of citizens remains steadfast in the face of undemocratic demonstrations and the principle of solidarity prevails in all debates", he said in his message, stressing that Brazil's independence must be built every day. "Democracy and its institutions must be preserved and strengthened", said the Archbishop, asking for compliance with the Federal Constitution of 1988.
On this day the Archbishop of Belo Horizonte invites us to think of the Brazilians who are unemployed or underemployed, to listen to the cry of the poorest and most vulnerable, to renew the commitment to life, and concludes: "Every Brazilian needs to see the many riches that exist in our differences. It is essential to recognize, above all, that each person is similar, a brother, a sister. When the dignity of human life is recognized, that all are sons and daughters of God, fidelity to the ethical principles that guarantee conviviality is strengthened". (SL) (Agenzia Fides, 7/9/2020)

ASIA/CHINA - In the footsteps of St. Joseph: to live Christian life in silence, humility and serenity