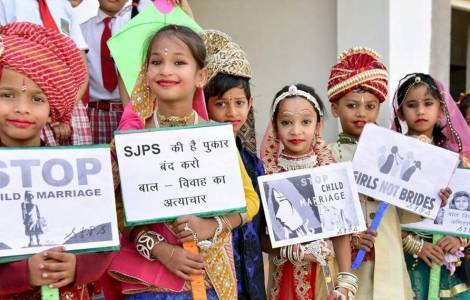 2020-10-07
Geopolitical Atlas documents the effects of the pandemic: the virus does not stop wars

2020-10-05
Conflicts and violence in Asia: the response of cities and territories

2020-09-07
Covid-19 and educational emergency: collaboration between governments and the private sector is urgently needed to support families

Pune (Agenzia Fides) - Tens of thousands of girls in various nations of Asia are forced, due to the Covid-19 pandemic, to marry at a very young. The girls come from families who live in poverty, aggravated by the coronavirus. It is feared that years of progress made to combat the phenomenon of "child brides" will be canceled out becauses of viruses and poverty: this is the alarm raised by the NGO "Girls Not Brides", which brings together a network of over 1,460 organizations scattered throughout the world, even in the Catholic world. "All the gains obtained in the last decade will suffer", says Shipra Jha, at the head of the NGO "Girls Not Brides", committed at an international level to fighting the plague of child brides. "Early marriage is firmly rooted in gender inequality and patriarchal structures. What has now happened is that Covid aggravates the situation", notes the NGO in a note sent to Agenzia Fides. The alarm raised by "Girls Not Brides" reminds us that poverty, lack of education and insecurity lead to early marriages even in stable times and that periods of crisis aggravate the problem. According to the United Nations, the phenomenon affects 12 million girls under the age of 18 every year.
Early marriage is a widespread practice in some traditional communities from Indonesia to India, Pakistan and Vietnam, but the numbers of the phenomenon - warns the NGO - had gradually decreased in recent years, thanks to the commitment of organizations and associations that encourage women's access to education and health services. However, these improvements are being eroded by the impact of the pandemic which, in many Asian states, causes job losses and leaves families in serious trouble.
The NGO Girls Not Brides explains: "South Asia is home to the largest population of young people and adolescents in the world. The pandemic has caused an unprecedented economic crisis and exacerbated inequalities. The impact is particularly severe for women and girls who face greater risks of gender-based violence, unwanted pregnancies and early marriages". They therefore ask for "policy responses to address their specific needs and challenges. This situation must change. The governments of Asian nations must step up their efforts to include women and girls among the priorities in the protection of human dignity in South Asia". "We need to work together, thanks to a partnership between governments and civil society, to ensure that girls at risk of early marriage and married girls are not left out among the interventions related to the Covid-19 emergency": is the appeal launched by the NGO.
Among the various Catholic organizations, it is above all the nuns of various religious orders who deal with the problem, accompanied by lay volunteers who work for religious organizations such as Caritas. In many Countries there is a special section of the organization that deals with early marriages and human trafficking. Caritas India, for example, works in this direction in dozens of villages in Bihar, to sensitize families on the harmful effects of early marriages. In India this tradition is prevalent mainly in the States of Jharkhand, Bihar, Rajasthan and Uttar Pradesh but also in the richer Punjab where, among other congregations, the Little Sisters of Saint Teresa are active who, through dialogue and a specific path of formation, educate the families of the diocese of Jalandhar to abandon this practice. In return, they offer education and professional training to young people and especially girls, to give families an alternative.
Sister Lucy Kurien, of the Sisters of the Holy Cross, is the founder and director of "Maher" (in Marathi language "Mother's House"), an interreligious community and organization for destitute women and abused children, based in Pune, in the State of Maharashtra. In the "Maher" houses in Jharkhand, Kerala, Uttar Pradesh and Maharashtra it is recommended, especially in rural areas, not to marry teenage daughters, by conducting a family education work. Awareness is carried out among Hindu, Christian and Muslim communities. Sister Lucy founded "Maher" in the early 1990s and in 1997 the first Maher house was opened in the village of Vadhu Budruk, on the outskirts of Pune. In February 2017, Sister Lucy also founded the "Association for Service to Humanity and Nature, an interreligious group that involves volunteers from different faith communities, on values of promoting human dignity and the emancipation of women. (MG-PA) (Agenzia Fides, 5/9/2020)

AMERICA/PERU - Reopening of the churches from November 2: the Bishops recall that Mass "is not a simple meeting"