ASIA/CAMBODIA - Towards a missionary October: the support of "Catholic Mission" Australia for people with disabilities 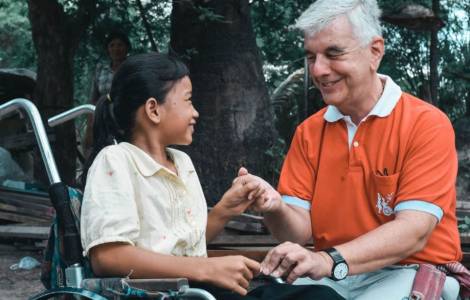 2020-09-04
Towards a missionary October: the support of "Catholic Mission" Australia for people with disabilities

Battambang (Agenzia Fides) - Supporting the life and work of the Arrupe Center in Cambodia, managed by Bishop Enrique Figaredo Alvar Gonzalez SJ in the Apostolic Prefecture of Battambang, in the north-west of the country, where for over 20 years they have accompanied and provide learning and growth opportunities for people with disabilities: this is the commitment of "Catholic Mission Australia", National Direction of the Pontifical Mission Societies in Australia, on the occasion of "Missionary Month", next October, in which the Catholic Church celebrates World Mission Sunday scheduled for 18 October. Throughout the month, Catholics from all over the world come together to support and celebrate missionary work and evangelization. "The Pontifical Mission Societies are at the forefront to help communities in the most vulnerable areas of the world", says in a note sent to Fides Fr. Brian Lucas, Director of "Catholic Mission" Australia.
"This year in particular, the commitment for missionary October focuses on the precious work of priests, religious and lay missionaries in Cambodia, in supporting people with disabilities and their families", says Fr. Brian, citing one of the many examples of Catholic Mission's action. "Thanks to the generosity of our donors, this support can change their lives", notes Fr. Brian.
Launched in 2001 by Bishop Figaredo, the Arrupe Center provides education, health care and support to children and young adults with disabilities, due to various causes, such as accidents with mines or other diseases such as polio or cancer.
Dara is an example of how important PMS support is. When she was 11, Dara lost her right hand and most of her eyesight due to a landmine accident. Unexploded landmines are still littered in the countryside where she lives in the rural village of Koh Kralar. For the past two years Dara has lived at the Arrupe Center, where she learned Braille and continued her studies.
Chen, also a mine survivor, lost both legs when he was 16. Unable to help his parents on the family farm, he had no prospects for cure or improvement in his life. Today, thanks to the Arrupe Center assistance program, Chen also leads a fulfilling and dignified life.
"Missionary Month of October 2020 gives our supporters, parishioners, teachers, students and parents an impetus for missionary work. It promotes awareness of the rights of persons with disabilities and the empowerment of the needy", stresses "Catholic Mission".
Awareness is also raised through the special sports program called "Socktober" which encourages schools to support Arrupe Center. "Socktober" - a combination of "Socks" and "October", for "soccer" - uses the game of soccer to encourage students to learn more about the reality of life in other parts of the world . A six-week tournament held among Australian students binds to core values like mission and social justice. "Over 200 schools have already signed up for Socktober, getting involved to help needy people like Dara and Chen", says Catholic Mission's Matt Poynting. "One of the most important things to do when trying to support people in need around the world is to learn about their reality. The Socktober program helps students and their families do this, while having fun, and acting meaningfully for others", he concludes. (PA) (Agenzia Fides, 4/9/2020)

ASIA - Social media for Evangelization: announcement in the modern Areopagus