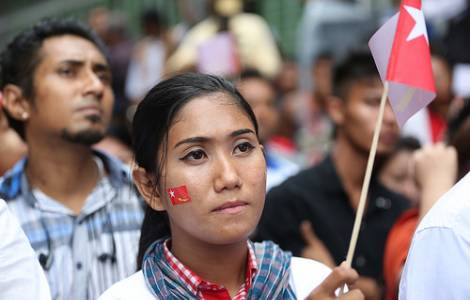 Yangon (Agenzia Fides) - "These are difficult times. My prayer accompanies each of you as you face the challenge of the pandemic. God will protect our nation. Now we are approaching another election in November. This calls us to fulfill our duty as citizens, by electing our representatives. In this historic moment, I address each one of you, not as a politician but as a religious person, as your own brother desiring only the common good and the welfare of the whole community of Myanmar": this is how the appeal released by Cardinal Charles Maung Bo, Archbishop of Yangon begins, who addresses Burmese citizens in view of the general elections scheduled for November 8, 2020.
In the 10-point message, sent by the Cardinal to Agenzia Fides, first of all he stressed that voting is "a sacred duty": "Voting is not only a right, but a sacred duty. It represents our long pilgrimage towards democracy. I urge everyone to ensure that your name is on the list of voters and to be present in the voting booth on election day. The active participation of citizens is essential in democracy".
Secondly, the Prelate observes that "voting is the only way to durable peace": "The flowering of robust democracy is the only hope for curing this nation, bleeding with fraternal conflict. As sons and daughters of this great golden nation, we deserve peace. Armed response has painfully killed thousands, made thousands refugees and IDPs. This dark era needs to end. Nobody has won a war in this country. Peace is possible, peace is the only way. Our great religions promote the principle of peace, I urge you, vote for peace".
The third point underlines the urgency of "Through democracy, the voiceless are empowered". For the real participation of the poor in government, elections are essential. Let not poverty deter us from election participation Opt for parties that opt for the welfare of the poor.
The message then in point four highlights the importance of "ensuring economic and environmental justice": "Peace in this bleeding nation,” he stated, “will not arrive until the resources of this country are kept at the service of all, especially for the poor and marginal communities. Judge your candidates, avoid those looters and cronies who ravaged all our resources and made us poor. Thieves cannot represent us".
The fifth point highlights the urgent need to "identify merchants of hatred": While democracy’s pillars, he said, are community and caring for the common good, he decried that "communal hatred and scapegoating are becoming potent vote bank tools. The world community expressed its horror at the manipulations by merchants of hatred in Myanmar, masquerading as protectors of religion and race, abetted by Facebook. These people are in collusion with the looters of our nation, not the guardians. Identify them and consign them to the garbage of history".
The Cardinal asks citizens - sixth point - to reject "supporters of foreign mafias": "Myanmar welcomes good-intentioned foreign investments that build a sustainable future for our people. Unfortunately, hordes of foreign elements in collusion with local cronies, have declared Myanmar as the last frontier for effortless loot. Many of these unpatriotic persons are competing in this election. Identify them: they are not to be part of any democracy."
The seventh request is "investing in human development": "For a nation blessed with young and energetic human resources, a rich future awaits us. Our rulers must affirm human development as a fundamental right. The previous regimes sadistically denied the development of our people, reducing this once-rich country into a low developed country. Let us choose candidates who have a clear plan for human development".
"Look for integrity not only intelligence", is the eighth point. "Myanmar – he highlighted - needs more leaders with intelligence but who are animated by a sense of servant leadership, embedding great values of honesty, integrity, accountability and transparency. Power comes from service. Myanmar has had enough strong leaders. It is time for servant leaders"
In the ninth point, an appeal is launched for "leaders who can fight Myanmar’s multiple pandemics": "The response to the Covid-19 pandemic has shown how a determined government could reduce devastation. The people of Myanmar have suffered other pandemics: the pandemic of hunger, the pandemic of conflict and displacement, the pandemic of unsafe migration, the pandemic of low-quality education. Let this election bring warriors who can fight against all these pandemics".
Finally, in the tenth and final point of the document, Cardinal Bo hopes: "Vote for a true Political and Economic Federalism: General Aung San lived and died for the dream of a true political and economic federalism. Vote for those who support General Aung San’s dream. Let there be a new dawn of peace and prosperity". (PA) (Agenzia Fides, 1/9/2020)