ASIA/MALAYSIA - Archbishop of Kuala Lumpur: taking care of each other is the vocation of the nation 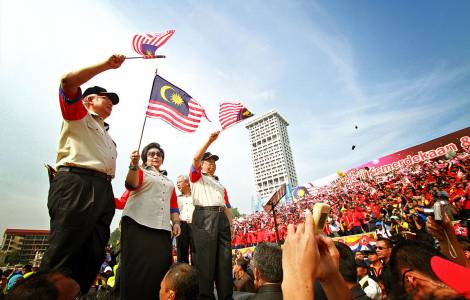 2021-03-12
Judicial decision on the use of the name of Allah in Christian publications, "a victory of common sense"

2021-02-24
Reopening of churches in Sarawak state during Lent

2021-02-05
The Archbishop of Kuala Lumpur to all citizens: "Let's promote fraternity"

Kuala Lunmpur (Agenzia Fides) - "This year will be remembered by many as the year where we all had to make radical changes. With many of our plans cancelled, our schedules cleared, and friends and family members distanced from us, we are adapting to new norms of life. It is natural for us to ask, where is God in all this? Be assured that God is still with us. Though our lives might be in many ways stripped of normality, and so many labouring under new hardships brought about by this pandemic, God has not abandoned us": this is what Archbishop Julian Leow says in a Message released for the 63rd "National Day" (Hari Merdeka) , on August 31, which commemorates the Declaration of Independence of Malaysia, of August 31, 1957, and in view of the Celebrations for the 57th Malaysia Day, on September 16, which commemorates the establishment of the Federation of Malaysia, which took place in 1963.
This year's theme, chosen by the entire nation for these celebrations, is "Malaysia Prihatin" ("Malaysia Cares"): is a reflection of the spirit of patriotism, unity and love for the country which has especially been evident in the nation’s efforts in fighting COVID-19.
The Malaysian Catholic Church feels fully part of this spirit. The pandemic has affected every aspect of life with radical changes. "In the midst of all these new difficulties, the Archbishop, quoting the Psalmist, assures: 'The Lord is near to the broken-hearted, and saves the crushed in spirit' (Psalm 34:18)".
'This - the prelate points out - is also true for Malaysia. The strength of a nation is seen, not when things are going well, but when crisis strikes. Therefore, it was edifying to see people united in extending help and support in times of need, regardless of race, religion or political belief. We are thankful to God for those who led the fight against COVID-19, especially all the healthcare professionals and front liners. The fight against the pandemic has shown that Malaysians can work together and be united as one both during good and difficult times".
"In line with this year's theme of 'Malaysia Prihatin' - continues Mgr. Leow - the new normal must be that of a greater concern and care for our neighbours, especially for those in the margins of society and have lost more because of this pandemic. We note with concern the different migrant communities, both documented and undocumented, who have been impacted greatly because they do not have the same social security safety nets as Malaysians. We plead with the government to extend relief to all on humanitarian grounds and include everyone in its recovery plan as it leads our nation out of this crisis".
Archbishop Leow also underlines, in the message sent to Agenzia Fides, that many have had to deal with a reduced income and unemployment. The economic aftermath has also put pressure on the overall wellbeing of Malaysians.
2020 marks the 50th anniversary of the "Rukun Negara" charter ("National Principles" which is the declaration of the national philosophy established by the proclamation of National Day, in 1970). That document constitutes a model for national unity guided by the following principles: God, loyalty to the king and country, the supremacy of the Constitution, the rule of law, respect and morality.
The Archbishop's message, recalling the anniversary, stressed: "The Rukun Negara is intended: to achieve and foster better unity among Malaysians from all walks of life; preserve a democratic way of life; create a just society where the prosperity of the country can be enjoyed together in a fair and equitable manner; ensure a liberal approach towards the rich and varied cultural traditions; and build a progressive society that will make use of science and modern technology. On this significant milestone, we call on the government to re-commit itself to these foundational principles as the anchor and integral narrative for all policy decisions in Malaysia".
And he continues: "The pandemic brought to the fore our ‘Belief in God’. It made us realise the vulnerability of our lives and our common need for God. Pope Francis, reminded us how vulnerable and interconnected we all are. If we do not take care of each other, we cannot heal the world". The Bishop's note invites everyone "to come together to fight this pandemic and revive our national economy", abandoning the division among leaders and politicians.
"We call upon all to put aside their differences and political squabbles and be united in working together for the good of the nation. At a time like this, it is foundational for us to show that our differences matter the least. We pray that the Rule of Law as enshrined in the Federal Constitution and the spirit envisaged by the Rukun Negara will always prevail", he says, to make Malaysia a "truly united and harmonious nation".
Malaysia is a multi-ethnic, multi-cultural and multi-religious country. The population is made up of nearly 32 million people, over 60% of whom are Muslims. Catholics represent only 4% of the population. (SD-PA) (Agenzia Fides, 31/8/2020)

ASIAMYNAMAR - The Church asks for "Vigilance and prayer"