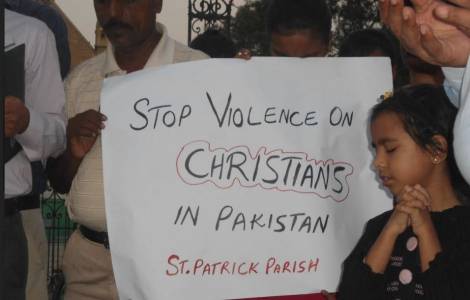 Karachi (Agenzia Fides): “The issue of extremism and insecurity is the main problem for religious minorities living in Pakistan. Day after day, the religious minorities of Pakistan face aggression, while the effects of religious extremism and fundamentalism are felt, which generate various forms of persecution, including the forced conversions of women from religious minorities": this is what Sabir Michael, a Catholic, former president of the "Research Advocacy and Social Training Institute" in Karachi, lecturer committed to human rights and the protection of religious minorities told Agenzia Fides. Professor Michael recalls that these issues were at the center of the "National Day of Religious Minorities" which every year in Pakistan is celebrated on 11 August, to commemorate the well-known speech that Mohammad Ali Jinnah, the founder of the Pakistan, gave on 11 August 1947 to the Constituent Assembly, in which he reassured religious minorities their legitimate rights, in the nascent Pakistan.
Sabir Michael, who also heads the Peace Welfare and Development Association (PWDA), a human rights organization cites some recent episodes: the brutal killing of the Christian Nadeem Joseph (see Fides 2/7/2020) and the murder of a man from the Ahmadia community killed in court in Peshawar before the judge: Tahir Ahmed Naseem, 57, was facing trial under the blasphemy law, when a young man entered the courtroom and killed him. Then he recalls the interruption in the construction of the Hindu temple in the capital of Pakistan (see Fides 1/8/2020). Moreover, he notes "there have been attacks on two churches in the province of Punjab: all these episodes are a sign of growing religious extremism and intolerance in Pakistan".
According to Sabir Michael "there is a lot of work to be done to remove the hateful narrative present in the textbooks used in Pakistani schools: they inculcate hatred and contempt in the minds of children, defining Hindus and Christians as infidels". And he notes: "These books also teach that Christians are 'agents of the Western world' and Hindus are 'spies for India', therefore these people cannot be trusted."
Michael observes: "The abduction and forced conversion of Hindu and Christian teenage girls in Sindh and Punjab provinces is also on the rise: this phenomenon is a threat to security and prosperity for religious minorities." Adds the activist: "According to the latest report by the Human Rights Commission of Pakistan (HRCP) published in April 2019, on average every year 1,000 non-Muslim girls are kidnapped, raped and then forced to marry a man of old age. Many of the girls forced into these marriages are under the age of 18."
In this context, Michael concludes: “It is urgent that the Government institutions ensure that these attacks on religious minorities must decrease; during the blockade due to Covid-19 such incidents have increased rapidly: It is the government's responsibility to rework on its plans and strategies to protect and guarantee the legitimate rights of religious minorities living in Pakistan”.
As reported in a note sent to Fides by the NGO "Minority Rights Group International" (MRG), “religious discrimination continues in the private and public sectors, and is also manifested in some areas of government, even during Covid-19”. There is evidence "of continuing social discrimination on the basis of religion and belief, which has a strong impact on the daily lives of those affected". "The repeated publication of job advertisements limiting certain low-paid and low-skilled jobs to religious minorities is just one example of this daily life reality," it reads. "MRG is concerned about hate speech, on the basis of religion or belief, as well as the ways in which discrimination impedes equality of opportunity in education, work, and business and ultimately, reintroduces poverty for many".
“Recognizing the fundamental rights enshrined in the Constitution of Pakistan, including religious freedom and equality among its citizens guaranteed by articles 20 and 25 of the Constitution, the NGO asks the government of Pakistan" to take steps towards equality and inclusion for all citizens of Pakistan.”
(AG-PA) (Agenzia Fides 25/8/2020)