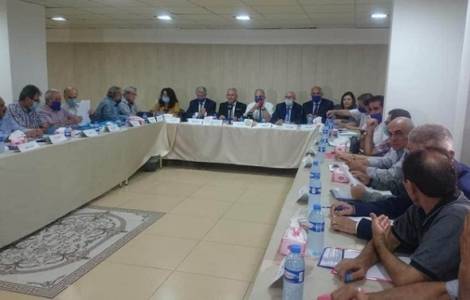 2020-06-17
The Maronite Archbishop of Aleppo: the new sanctions against Syrian people are a "diabolical act"

2020-03-21
The Jesuits: "Need to start a deep and sincere dialogue for the good of the Syrian people"

Qamishli (Agenzia Fides) - There are also political groups led by Christian militants in the new "Front for peace and freedom", the new alliance of organizations inaugurated in recent days in the city of Qamishli with the intent to unite in an autonomist orientation plan different forces operating in northeastern areas of Syria. The new cartel of organizations, inaugurated on Tuesday 28 July, includes, among others, the Assyrian Democratic Organization, the Arab Council of Jazira and Euphrates, the "Syria Tomorrow" Movement and the Kurdish National Council in Syria (KNC, Kurdish faction in contrast with the PYD, Party of the Democratic Union). The new political alliance counts on the help of western powers, starting from the United States and France, and "coordinating efforts to find a political solution to the Syrian crisis, to save the nation from the abyss in which it is sliding and from the dangers that threaten its very existence, while the Syrian regime clings to a military solution to survive".
The Assyrian Democratic Organization (ADO) presents itself as the oldest political formation created in Syria by Syrian and Assyrian Christian militants, and in recent years has sided with the opposition groups against Assad's government. In recent years, the Organization had also had disagreements with the predominant Kurdish political-military groups in that region of Syria, contasts which were overcome thanks to the mediation of Masud Barzani, former President of the autonomous Region of Iraqi Kurdistan.
In their founding manifesto, developed in 10 points, the organizations adhering to the new Front for Peace and Freedom ask to create an independent and sovereign representative democracy in Syria, which also recognizes Kurdish, Syriac and Turkmen as official languages in the regions in which these groups are present. The manifesto also calls for institutional recognition of Syrian ethnic and religious pluralism, and in particular "recognition of the national identity of the Kurdish people". The document indicates administrative political decentralization as the main way to manage the Country, preserving its political unity but also guaranteeing its ethnic and cultural pluralism. "Syria" reads one of the ten points of the ideal program of the new 'Front' "is a democratic republic that adopts the principle of separation between religion and the State, and is neutral towards all ethnic groups and religions, recognizing and guaranteeing the freedom of religions and beliefs, including the Yazidi religion. "The document also calls for the drafting of a new Syrian Constitution, to be drawn up involving all the components of the Syrian people, as an instrument and starting point of the national reconciliation process and also initiating proceedings aimed at denouncing and punishing all those who in the recent history of Syria have been guilty of war crimes. (GV) (Agenzia Fides, 31/7/2020)

ASIA/TURKEY - "Egyptian Fatwa" against those who want to re-transform Ayasofya in Mosque. The pronouncement of the Council of State is awaited