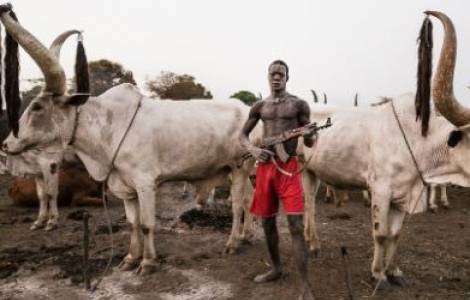 2021-04-29
Forgiveness, unity, and reconciliation: the message of the wounded Bishop

2021-04-27
Attack on the Bishop, those behind the attack are being sought: Carlassare was welcomed with great celebration of the people

2021-04-27
Bishop Carlassare in hospital: "I forgive my attackers"; the first arrests take place

2021-04-26
Fr. Carlassare, new bishop of the diocese of Rumbek wounded by gunshots

Juba (Agenzia Fides) - Peace is still far in South Sudan. Violence is widespread across the Country, which sees farmers involved, in search of pastures for their animals. "Here instability appears to be endemic", explains to Agenzia Fides Giorgia Gelfi, project manager of the NGO "CUAMM - Doctors with Africa". "People are addicted to a state of constant tension that has its roots in politics, but also in the history and culture of this Country," she says.
South Sudan, which became independent in 2011, collapsed in a civil war in 2013 when some Dinka ethnic soldiers, loyal to President Salva Kiir, started clashes with those of the Nuer ethnic group, led by Vice President Riek Machar, and accused of preparing a coup. In 2018 Kiir and Machar signed an agreement for sharing power. However, on August 28, Machar and the leaders of other groups refused to sign the last part of the agreement, alleging that disputes over the division of power and the adoption of a new constitution had not been efficiently handled.
The two leaders then returned to negotiate peace in September 2018 by signing the peace agreement, thanks to pressure from regional and international powers. Under the terms of the agreement, Machar would again have served as vice president. Kiir and Machar reached an agreement to form a government of unity on February 22, 2020, while continuing to remain in conflict over internal issues.
"The appointment of new governors - continues Giorgia Gelfi - could lead to a turning point. President Salva Kiir has ordered them to restore peace in their respective areas: it is a peremptory order that we hope will bring serenity and allow us to operate peacefully in the area".
Meanwhile, in the Country, initially spared by the epidemic, coronavirus cases are increasing and, with them, the emergency. "The situation - continues Giorgia Gelfi - is apparently under control. There are only 2,300 confirmed cases and about forty deaths have been registered. However, we fear that the situation will worsen. Few swabs are carried out in the Country, the risk is that the infection is more widespread".
People have little awareness of the danger. Distances are not respected and face masks are not worn. There are a few facilities and poorly equipped. Thanks to the contribution of Italian and international donors and the partnership between the United Nations, the NGO "CUAMM - Doctors with Africa" has sent diagnostic materials to five hospitals in Africa, such as infrared thermometers and oxygen concentrators, but also filters and tanks for water and portable ultrasound systems.
"The operation - explains Don Dante Carraro, director of Doctors with Africa CUAMM - was facilitated by the partnership between CUAMM and the United Nations humanitarian intervention bases - managed by the World Food Program, including Brindisi. A precious and strategic agreement that allows access to a network of flights and humanitarian hubs that are always active, to guarantee the timely transport of essential materials in emergency situations".
They are also valuable aid because Covid-19 is not the only emergency South Sudan is facing. "The rainy season has arrived - concluded Giorgia Gelfi - and, with it, malaria. The initial symptoms are the same as coronavirus. For us, therefore, it will be even more complicated to assist the people who come to our centers. An additional challenge in an already complex situation ". (EC) (Agenzia FIdes, 31/7/2020)