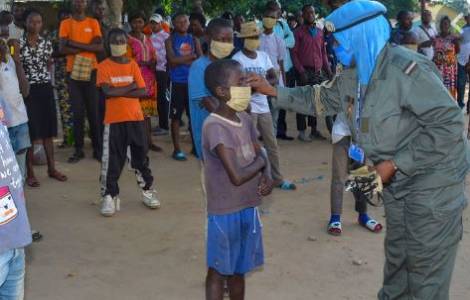 2020-10-07
The UN: 60% of the Central African population needs humanitarian protection

2020-10-02
"Science and faith united in the fight against Covid-19", recalls Cardinal Nzapalainga

2020-09-07
"Armed groups control almost 80% of the territory and threaten our future", denounce the Bishops

Bozoum (Agenzia Fides) - In the Central African Republic, Covid-19 is spreading rapidly. According to the World Health Organization, there are at least 4,599 confirmed cases and 59 deaths. "On the territory, however, the situation is much worse", says to Agenzia Fides Father Aurelio Gazzera, a Carmelite missionary who has been active for years in the diocese of Bozoum. The priest has seen the contagion grow in recent weeks and is concerned about the consequences that could occur in a very poor country, which has lived in a state of permanent war since 2013. In the nation, the government controls only the main cities. The rest of the provinces are occupied by militias who control the sources of local wealth (mines, woods with precious wood, herds, etc.).
"In recent months - continues Father Gazzera - it seemed that the coronavirus had spared the Central African Republic. The official cases were very few, as well as the deaths. To contain the spread, however, the authorities, in my opinion, have used the wrong strategy". In fact, the government has ordered the closure of airports to avoid the influx of people from abroad. At the same time, however, it did not close the land borders, especially those with Cameroon (where Covid-19 spread massively). So people who move, periodically crossing borders, have brought the virus.
"The Central African Republic - observes the Carmelite - is very poor. Initially 13 ICU beds had been prepared, then raised to 50. But they are all located in Bangui, the capital. Elsewhere funds have been sent, but a prevention network nor wards for the sick have been created. In Bozoum, 400 km from the capital, little test material and very few drugs have arrived". Testing is a very serious problem. They are made to a reduced extent and especially in large centers. No analyzes are carried out in the countryside and villages. "So - continues Father Aurelio - we do not know if the official numbers really correspond to the real situation. It can be assumed that the contagions are in greater numbers. As a local Church, with the help of the Italian Bishops' Conference, the diocese of Massa Carrara and Caritas USA and Italy, took the field to promote good behavior to avoid the spread of the virus and to distribute protective material. We mainly focused on the weaker sections of the population, in particular the elderly and the disabled".
Covid-19 hits a nation that has always experienced a precarious health situation. AIDS, malaria, tuberculosis are constant presences in the population. "From a medical-health point of view - Father Aurelio concludes - we live in difficult conditions. Malaria here is endemic. The mosquito nets we distribute are used to fish or to protect vegetable gardens from insects. We do the same for HIV and TB".
Meanwhile, in the field of security and peace, a positive episode is reported in Bouar, in the western district of the Central African Republic: a humanitarian mission has managed to stop a revolt that destabilized the entire region on the border with Cameroon. For some months, in fact, a group of ex-militants, isolated and without sustenance because of the Covid-19 pandemic, had blocked the access routes to the city of Bouar, a hub on the main commercial artery of the Country. Some volunteers from the Community of Sant’Egidio, committed to promoting peace in the Central African Republic, brought food and aid made available thanks to funding from FAI (Foundation Assistance Internationale). The operation, carried out in collaboration with the presidency of the Central African Republic, had the effect of stopping the revolt, reopening access to the city and restoring confidence in disarmament, in a Country where several armed groups still operate. (EC) (Agenzia Fides, 30/7/2020)

ASIA/BANGLADESH - Catholic nun dedicated to the sick dies of coronavirus

ASIA - Geopolitical Atlas documents the effects of the pandemic: the virus does not stop wars

AFRICA - Covid-19: WHO explains the factors that have led to the low number of cases in Africa