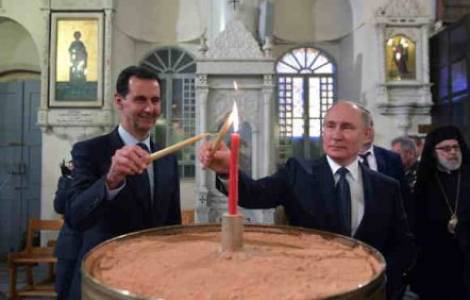 Hama (Agenzia Fides) - With the placet of the Damascus government, and with the support of Russian political and military sectors, the construction of a church dedicated to Divine Wisdom, could soon enter the operational phase, erected with the declared intention of reproducing, albeit at a reduced size, the architectural profile of Hagia Sophia, the ancient Byzantine Basilica of Constantinople - today Istanbul - recently converted into a mosque by the Turkish authorities.
The Syrian "mini-Hagia Sophia", according to the promoters of the project, will have to rise in the Hama region. This is what Syrian and Lebanese media reported, citing information released by sources close to the government of Damascus, who present the operation as a sort of Russian-Syrian response to the Turkish choice to reopen Hagia Sophia to Islamic worship. According to unverifiable information, relaunched through social networks by activists and propagandists close to the Syrian government, the laying of the first stone of the future church apparently has already taken place in al Suqaylabiyah (a town in the governorate of Hama inhabited before the war by about 20 thousand Orthodox Christians), in the presence of representatives of the Moscow Duma (the Russian Parliament) and with the placet of the hierarchies of the Greek Orthodox Patriarchate of Antioch (based in Damascus). According to reports, Russian soldiers stationed at the base near Latakia are already preparing plans for the construction of the new church.
Nadel al Abdullah presents himself as the promoter of the iniziative, who is in particular known for leading a militia that presented itself as a self-defense force composed of Orthodox Christians, indicated among the paramilitary groups deployed with the Assad regime in the conflict against the militants jihadists of the Islamic State (Daesh) or of Jabhat al Nusra.
Abdullah declares that he has made available the land on which the Syrian “Mini-Hagia Sophia” should rise.
Syrian and Lebanese media also re-launch the statements of the Russian parliamentarian Vitaly Milonov, also known at home for the campaigns aimed at restoring the ancient name of Constantinople in Russian official publications to indicate the current Turkish city of Istanbul, and for having worn shirts with the inscription "Orthodoxy or death", according to which the Russian Orthodox are ready to generously support the construction in Syria of a church with the features of Hagia Sophia.
This option is presented by the Syrian media as a response to the choice of the Turkish political leadership to re-Islamize the ancient Christian Basilica, which became a mosque after the Ottoman conquest of Constantinople and transformed into a simple museum complex in 1934 by the will of Mustafà Kemal Ataturk, founder of the modern Republic of Turkey. In a controversial key with Turkish President Recep Tayyip Erdogan, Milonov also stressed that Syrian President Bashar al Assad has never dreamed of converting the temples of a specific faith community into places of worship linked to other religious affiliations.
The story of the ancient Basilica of Hagia Sophia, converted into a mosque, and more generally the condition of Christians in many Middle Eastern Countries, becomes an increasingly evident terrain for geo-political operations, with effects currently undecipherable on the present and future of the baptized of those lands. (GV) (Agenzia Fides, 29/7/2020)