EUROPE/FRANCE - In the memory of Father Hamel, the rejection of all violence and respect for human life 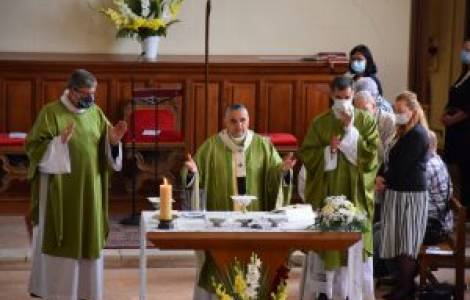 2020-10-12
Towards Mission Sunday - the Superior of the MEP: Pauline Jaricot and Therese of Lisieux, examples of missionary life

Rouen (Agenzia Fides) - "For the fourth year, we are gathered in this too small church of Saint-Étienne du Rouvray, with you priests, nuns, parishioners, with you, the dear family of Father Jacques Hamel, with you witnesses of this dramatic gesture committed here". Thus the Archbishop of Rouen, Mgr. Dominique Lebrun, began the Holy Mass which he presided yesterday, Sunday 26 July, in the same church where Father Hamel was assassinated on the altar by two Islamic militants, on 26 July 2016 (see Fides, 26/7/2016).
The commemoration was attended by Mgr. Eric de Moulins Beaufort, Archbishop of Reims, President of the French Bishops' Conference, the Minister of the Interior, Gérald Darmanin, parliamentarians, civil and military authorities.
Like every year, the commemoration was marked by several moments: silent march from the presbytery to the church of Saint-Étienne; Sunday mass; Ceremony in front of the Stele of Fraternity. "Religious and civil authorities, citizens, believers of all faiths and non-believers, come together to demonstrate their common rejection of all violence and their profound respect for human life", underlines the statement of the diocese, which "thanks all those who join directly or indirectly, through prayer and commitment, to this fourth anniversary".
"The criminal justice system of our country continues to investigate a case involving possible accomplices - continues the statement -. Will the investigation shed light on what led to this crime? Will its results help our country protect itself better and protect its children from deadly radicalization? Everyone wants it, but the penalty cannot be enough. Everyone must feel responsible for common life. Much is being done; much remains to be done. Evil hides, and not only in the form of viruses. Separatism as well as social fractures are evil causes that Father Hamel managed to denounce without resorting to scapegoats, but pledging to witness an equal love for everyone, in the midst of everyone".
Pope Francis granted the dispensation to open the process of Beatification of Father Hamel, a few months after his death, in order to recognize his martyrdom. Announced on Holy Thursday, April 13, 2017, the diocesan phase of the cause of beatification officially opened on May 20, 2017, and ended on March 9, 2019 (see Fides, 12/3/2019). The complete dossier was then delivered to the Congregation for the Causes of Saints, which last spring informed the Archbishop of Rouen that the canonical procedure envisaged "was faithfully respected and that, consequently, the tribunal of the Archdiocese of Rouen acted in a legally valid way". (SL) (Agenzia Fides, 27/7/2020)