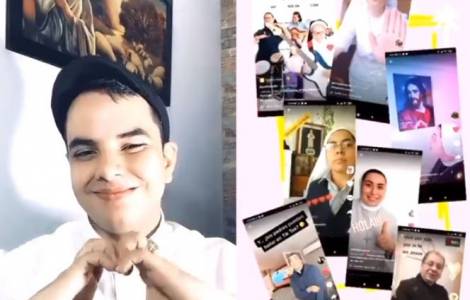 2020-09-22
Consternation of the Bishops after the latest massacres: "enough with this mechanism of death"

2020-09-15
A call to social friendship from the Archbishop of Bogotà: "We cannot remain indifferent"

2020-09-08
In the Week of Peace, new complaints on the violation of human rights in Chocó

Ibagué (Agenzia Fides) - In times of pandemic, the Church recognizes the importance of intensifying the spiritual accompaniment of populations. For this reason, the priests of the various ecclesiastical jurisdictions, which are located throughout the Colombian territory, have taken on the task of reaching the communities by other means given the isolation and sanitary measures adopted by the government. Social networks have thus become very important in this moment of crisis, they have become one of the most used information channels by ecclesiastical jurisdictions and religious communities.
According to the note sent to Fides by the Colombian Episcopal Conference, Father Cristian Camilo Cárdenas Aguirre, priest of the archdiocese of Ibagué, stressed that "preaching through these digital platforms is like sailing in the open sea, because one meets all kinds of people".
"In church you can preach but always to the same people, who know the Gospel, who are pious or religious, even to people who want to start along that road, and are already accustomed to our speech and our dialogue; But when you dare to preach through social networks, you reach atheists, Catholics, Protestants, Muslims, etc., anyone, believer or non-believer. This is interesting because one realizes that they too are listening, it is evident in the comments they leave", highlights Father Cristian Cárdenas.
His action is based on the Gospel of St. Luke, chapter 5, verse 4, in which the Lord invites to go out into deep water and let down the nets for a catch. This way of evangelizing has been carried out for about 4 years, when he was still a deacon, and every week he published a 2-minute reflection on the Gospel in video format.
"I started with Facebook, then YouTube and Instagram. In this pandemic, people had more time to be on social networks and needed more accompaniment, which meant that reflection took place every day. Then I entered Tik Tok, a social network I didn't want to enter; However, I was motivated by the youth of the archdiocese's youth ministry", says Father Cárdenas.
"The pandemic made us understand that social networks had to be flooded with the Gospel, because if the Church does not do it, other people will do it, but with other types of content. In the midst of the tragedy, the Church has been able to update itself on this aspect. The 21st century pulpit is made up of social networks, and although we may have a large audience but not a lot of reception, they are spaces we will gain". (CE) (Agenzia Fides, 25/7/2020)