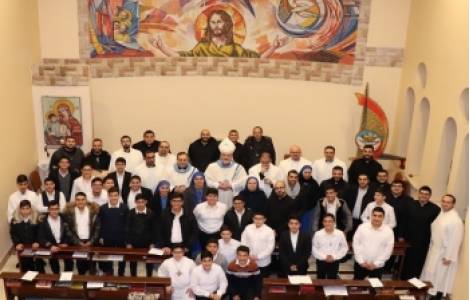 2021-02-02
"I come from a land of conflict". Margaret Karram, Palestinian from Galilee, elected President of the Focolare Movement

2021-01-30
New impetus for the peace process: Patriarch Pizzaballa recognizes initiatives "at the grassroots"

Beit Jala (Agenzia Fides) - The minor Seminary of the Latin Patriarchate of Jerusalem announces the suspension of study courses and training activities for the 2020-2021 academic year. Various factors have contributed to this painful decision, connected in various ways to the health emergency also represented in the Holy Land by the coronavirus pandemic.
The situation of the Seminary - based in the Palestinian city of Beit Jala, near Bethlehem - and the planning of the activities of the next academic year had been at the center of a meeting held on 13 January with the participation of priests and major seminarians belonging to the institute. Precisely the evaluation of some effects of the pandemic has convinced the leaders of the Latin Patriarchate and of the same patriarchal institute to consider the normal scheduling of activities for the children of the minor Seminary impracticable for next year. The Rector of the Seminary, Father Jacob Rafidi, wrote a letter to confirm that these activities are suspended for the 2020-2021 academic year.
Until the arrival of the pandemic, the boys involved in the seminar activities, who came mostly from Jordan, attended the study courses at the secondary schools of the seminary, resided at the institute and also benefited of courses and activities to support spiritual formation within the Beit Jala headquarters. In the statement - as also the organ of the Catholic Center of Studies and Media, based in Jordan refers - the Rector Jacob Rafidi mentioned among the causes of the announced suspension of courses also the impossibility for the seminary students residing in Jordan to obtain the visas needed to return to the institute, given the ongoing closure of the borders between Jordan and Palestine due to the pandemic. At present, the health and epidemiological conditions of the region, determined by the pandemic emergency, do not allow us to predict even if it will be possible to ensure the normal opening of the school year 2020-2021.
The Latin Patriarchal Seminary, now located in Beit Jala - the official organs of the Latin Patriarchate of Jerusalem report - has welcomed and formed candidates for the priesthood for the Latin diocese of the Holy City and for other dioceses of the Holy Land for over a century and a half. The Latin Patriarch Giuseppe Valerga founded it in December 1852, following the Catholic intuition of forming local Arab Christians and young people from abroad so that they could become priests of the Latin Catholic Church in the Holy Land. The formation of future priests is entrusted to the clergy of the Latin Patriarchate. The life of the seminary, in all these decades, has also enjoyed the care and selfless dedication of many female religious congregations, such as the Sisters of Mercede and - at the present time - the Servants of the Lord and the Virgin of Matarà.
The minor Seminary - now forced to suspend activities, has always gathered young boys from all regions of the diocese, interested in deepening their vocation to the priesthood, and gradually introduced to a life focused on prayer, community sharing and spiritual discernment. The participation in the activities of the minor Seminary, so far, prepared the boys to enter the Seminary and has formed about 290 priests, including 15 bishops and 3 patriarchs: Giacomo Giuseppe Beltritti, Michel Sabbah and Fouad Twal. Until the 2019-2020 academic year, the seminary hosted 30 minor seminarians and 20 major seminarians, both Palestinian and Jordanian. (GV) (Agenzia Fides, 23/7/2020)

ASIA/HOLY LAND - Heads of the Churches of Jerusalem: at Christmas let us rejoice in God's gift for us, in these difficult times

VATICAN - "The mission of the Church: missionary charity and fundraising": webinar of the Pontifical Mission Societies in Spanish

ASIA/PHILIPPINES - General Assembly of Bishops: "sharing faith and resources, with generosity and co-responsibility"

ASIA/KAZAKHSTAN - The Bishop of Karaganda: "Blessed Bukowiński, the deep root of the Kazakh Church and its vocational flowering"