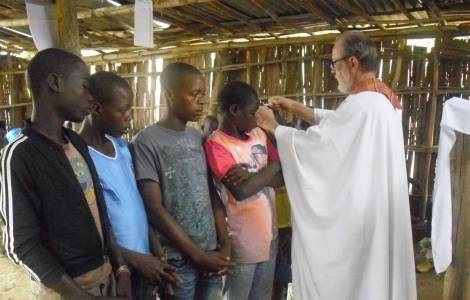 2021-02-22
Missionaries' warning: young people risk losing their faith due to the pandemic

Kikolo (Agenzia Fides) - "The post-Covid recovery in Angola has been once again postponed: we here in the neighborhood of Kikolo, on the outskirts of the capital Luanda, are heading towards the fifth closing month. In June the government announced the end of the lockdown but then, with the daily increase in cases of contagion, it decided to keep the capital isolated from the rest of the country again": this is what Father Renzo Adorni, priest of the Society for African Missions, SMA, a missionary in Angola writes to Agenzia Fides.
"The problem - explains the missionary - is that in the large poor and popular suburbs of Luanda, people who live on informal activities must invent something every day to survive with their family. Without a salary, locked up in their own little houses, under a red-hot sheet roof, how can families look at the empty pot?"
Fr. Adorni says that the large public market has been reopened for three days a week, in addition to the street sale, naturally with a mask and respected distance. However, the rules are not always respected, so the police are often forced to intervene abruptly.
"Parish Caritas and the Justice and Peace Commission, with the support of the SMA fathers, try to alleviate extreme situations of misery. In the different neighborhoods of our parish of Bom Pastor we have assisted about a thousand people including the sick, widows, orphans, street children, the disabled, single mothers, foreigners".
"Even the churches are still closed, but thanks to the media, Radio Cattolica and Radio Maria Angola, which help feed faith, the faithful can pray the rosary, listen to Mass and some catecheses, as well as receive information on Covid -19 and its prevention. Thank God so far none of the parishioners of our Parish have died from Covid".
Father Renzo concluded by saying that "there are 350 catechumens, young and adults, ready for Baptism, and as many for Confirmation, waiting to receive the sacrament after three years of preparation. They were to be baptized at Easter. For Confirmations, we must necessarily wait, because we are still without a Bishop. We were allowed to celebrate the Chrism Mass with the blessing of the Holy Oils, but only priests and some nuns attended, in Caxito, seat of the Diocese". (RA/AP) (Agenzia Fides, 23/7/2020)