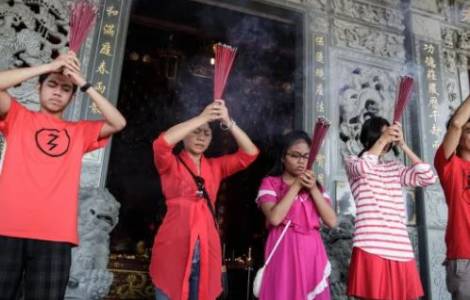 Jakarta (Agenzia Fides) - Protests against Chinese workers employed by some companies in the south-east of the island are not abating in Sulawesi, Indonesia. The protests, which began in March, are tied to an atmosphere of poor respect for minorities which has an ancient history in the archipelago, but has recently been heightened by the Covid-19 emergency. The Chinese community, which represents an important part of the overseas diaspora in Asia, has often been at the center of marginalization and discrimination campaigns in the archipelago.
The dispute concerns the employment of 500 skilled workers to be sent from China to build smelters belonging to PT Gunbuster Nickel Industries (GNI), a subsidiary of PT Virtue Dragon Nickel Industry, in collaboration with PT Obsidian Stainless Steel. Of the 500 workers requested, however, only half of them arrived and the protests put at risk not only their work, but also that of the Indonesian workforce employed since, without skilled workers, the new jobs at the plant would not go ahead. In April and June demonstrations resumed and also in recent days at the airport of Kedari, near the area affected by the important industrial project. Due to the demonstrations governor Ali Mazi blocked the arrival of foreign workers in Southeast Sulawesi in April, then admitted in mid-June, now again at risk. In this uncertain situation, the VDNI company tried to respond by proposing the employment of 5 thousand new Indonesian workers if foreigners will be allowed to work on the project.
According to data in May, there are almost one hundred thousand foreigners employed in Indonesia, less than 0.1 percent of a total workforce of 124 million. The largest group of foreigners, almost 36 thousand people, comes from the People's Republic of China, which is also the second largest foreign investor in Indonesia. Last year, Chinese companies invested $ 4.7 billion in the archipelago. However, the grip of Covid-19 made the lives of many difficult in addition to the fear of unemployment and intolerance.
Discrimination against ethnic and religious minorities is in fact always possible in a planet as vast and ethnically diverse as Indonesia. In particular, a sensitive key is that of mistrust towards minorities of Chinese origin, who historically have suffered hostility and violence. According to unofficial figures, there are more than 6 million people of Chinese origin in Indonesia. However, the 2000 census recognized only 1.2% of the population as Chinese, or about 1.9 million people. Among them, the Chinese born in China keep Chinese culture and traditions alive in Indonesia through domestic rites, celebrating Chinese holidays and teaching the Chinese language to their children.
In a scenario of fragile balance in the relations between the majority population and ethnic-religious minorities, Indonesian religious leaders of different faiths are always very active in promoting tolerance, respect, social and religious harmony, inclusion, coexistence, recalling the national motto "unity in diversity". (MG-PA) (Agenzia Fides, 18/7/2020)

ASIA/MYANMAR - Electoral victory of the National League for Democracy, which opens up to ethnic parties

AMERICA/COLOMBIA - The Bishops: "unemployment is one of the most urgent challenges if we want to overcome this crisis"