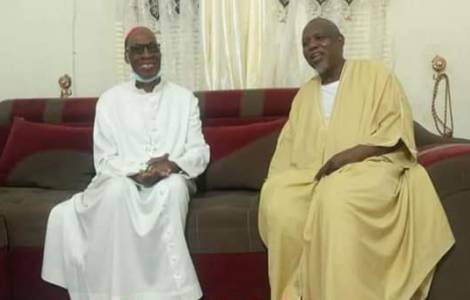 2020-06-24
Cardinal Zerbo: Catholic sentinels and mediators among violence and conflict

Bamako (Agenzia Fides) - "We are very concerned about the resumption of violence in Bamako. We take this opportunity to launch an appeal for peace, in light of all the damage caused. Mali does not deserve what is happening now", said Cardinal Jean Zerbo, Archbishop of Bamako, on Radio et Télévision Nationale du Mali, ORTM, on July 14th. "What happened last Friday, and which continues today in the capital Bamako, is cause for concern", continued Cardinal Zerbo. "Encouraging people to violence whose consequences we see today is unacceptable. We cannot do anything, but resort to God's mercy for all the atrocities committed during these demonstrations". At least eleven people died during the riots that broke out in the capital between Friday 10 and Sunday 12 July.
Cardinal Zerbo's voice joined that of Mali's other major religious leaders, who launched a common appeal for peace. In addition to Cardinal Zerbo, Ousmane Cherif Madani Haidara, president of the High Islamic Council of Mali Nouhou Ag InfaYattara, president of the Association and Mission Association of the Evangelical Protestant Church in Mali (AGEMPEM), invited Malians to calm and dialogue.
"I ask citizens to keep calm. Whatever difficulties there are, when you start a real dialogue, you can find a solution", said the President of the Islamic High Council of Mali (HCI), Cherif Ousmane Madani Hadaira, assuring the population that the religious leaders are doing their best to find solutions quickly.
The President of the Association of Ecclesial Groups and Protestant Evangelical Missions in Mali (AGEMPEM), Reverend Nouh Ag InfaYattara, declared that "no child, no girl can be indifferent to this situation".
In an interview with Fides, Cardinal Zerbo stressed that "in this difficult situation, we religious are left with only two behaviors: being sentinels and acting as mediators to encourage dialogue and a return to calm" (see Fides, 24/6/2020).
President Ibrahim Boubacar Keïta, known as IBK, first elected in 2013, was re-elected in 2018 in a vote marked by the kidnapping of his main opponent, Soumaïla Cissé, as well as some electoral agents and intimidation of voters. The protests began after the Constitutional Court in late April invalidated the election of 30 opposition MPs
In May, IBK opponents formed an unprecedented alliance around an influential and respected imam, Mahmoud Dicko. Together, they launched an appeal to take to the streets for the first time on June 5 and called themselves "M5-RFP" for "June 5 Movement - Patriotic Forces Rally". The M5-RFP calls for the dissolution of Parliament, the formation of a transitional government of which he would designate the Prime Minister, as well as the replacement of the nine members of the Constitutional Court, accused of collusion with the authorities. (L.M.) (Agenzia Fides, 17/7/2020)