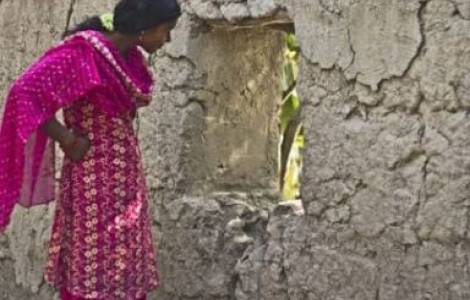 New Delhi (Agenzia Fides) - A group of Indian nuns is strongly committed to tackling the phenomenon of human trafficking during the Covid-19 pandemic. The "AMRAT - Talitha Kum India" movement, the Asian alliance of women religious against trafficking started in 2009, is particularly attentive and active in this phase, in which traffickers can take advantage of the contingent situation.
Human Trafficking is the second best organized criminal phenomenon in India, alongside trafficking in arms and drugs. Several governmental and non-governmental organizations are involved in facing this huge challenge. AMRAT - Talitha Kum India has developed some strategies, operating in the prevention, rescue, protection, rehabilitation, reintegration of victims.
"Many people are vulnerable to human trafficking during the Covid-19 pandemic: loss of work, difficulties returning to native villages and estreme poverty contribute to making them exposed to human trafficking", says to Fides Sister Jyoti Pinto, of the Congregation of the Sisters of the Little Flower of Bethany, founder of AMRAT - Talitha Kum India. "A person can be sold several times; we are facing the harrowing reality of modern slavery, which is human trafficking", she notes.
Sr. Jyoti Pinto motivated not only her congregation, but also the other religious orders to join together to fight this heinous crime: thanks to Sr. Arpan, who lives in New Delhi, the capital of India and Sr. Prema, who resides in Guwahati, the capital of Assam state in northeastern India, the organization has reached thousands of women and children stranded in different parts of India from northeastern India during the long lockdown imposed to curb the spread of COVID-19 since March 25. The nuns not only save women and girls from human trafficking, but help them survive by organizing sustenance and reintegration initiatives in society.
Many women from rural Indian communities move to other cities with the hope of a better life and job prospects. However, the process often becomes a trap. Traffickers choose vulnerable communities - such as those with few prospects of income or affected by wars or natural disasters - using the dream of a better life as bait. The girls find themselves working as prostitutes, domestic helpers, workers, beggars. Sometimes they are victims of forced marriages.
To counter the phenomenon, networking is essential: even if not directly members of AMRAT, there are about 100 thousand Catholic nuns who work silently in the apostolate, who go to villages, roads, refugee camps, schools, hospitals, tea plantations, prisons, slums, signaling potential situations of presence of human traffickers.
Thousands of trafficking cases are reported to the Indian authorities every year; between 2011 and 2018, 38,508 cases were reported, based on government data.
The Global Slavery Index estimates that 8 million people in India - including children and teenagers - live in forms of modern slavery, where violence, coercion and deception are used to exploit people. (SD-PA) (Agenzia Fides, 17/7/2020)

AFRICA/ETHIOPIA - The odyssey of Eritrean refugees, forced to starve, rejected, victims of traffickers

NEWS ANALYSIS - Africa, the sisters of the Good Shepherd alongside the exploited of cobalt