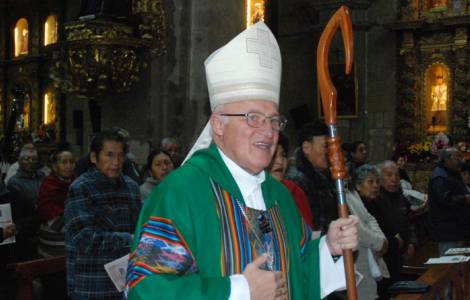 2021-06-11
The pandemic is at its peak, saturated hospitals and cemeteries; the Church asks the government to guarantee vaccines

2021-05-04
Archbishop Centellas calls for election promises to be kept: "Hopes must not be disappointed"

2021-04-28
PMS National Assembly: at this time of the pandemic we need to "reinvent ourselves" as promoters of the mission

2021-04-14
The service of Catholic education in society: a contribution to the common good

2021-03-31
The Archbishop of Sucre: "We will have very difficult moments but we must move forward because we do not live to die, but to live"

El Alto (Agenzia Fides) - "With deep sorrow we announce that Bishop Eugenio Scarpellini, Bishop of the diocese of El Alto, died on the morning of Wednesday 15 July, after the contagion from Covid-19", reports the Bishops' Conference of Bolivia, recalling that he was a "missionary in Bolivia since 1988, a pastor of the Church who distinguished himself for his dedication to the poorest and his tireless struggle for justice. Monsignor Scarpellini was hospitalized in the Sagrado Corazón hospital in the city of El Alto, and was being treated for Covid-19, today he had two cardiac arrests and the doctors were unable to do anything".
Born in Verdellino (Italy) on January 8, 1954, ordained a priest on June 17, 1978, and on January 11, 1988 Eugenio Scarpellini arrived in Bolivia as a Fidei donum missionary of the diocese of Bergamo. In the archdiocese of La Paz he held several positions: parish priest, treasurer, college director. In 2004 Mgr. Scarpellini was appointed National Director of the Pontifical Mission Societies (PMS) in Bolivia and in 2006 Coordinator of the Pontifical Mission Societies of the American continent. On July 15, 2010 Pope Benedict XVI appointed him Auxiliary Bishop of El Alto, in 2012 he was elected Secretary General of the Bolivian Episcopal Conference, and on June 26, 2013 Pope Francis appointed him Bishop of El Alto. Tireless missionary animator, one of his greatest commitments was the celebration of the Fifth American Mission Congress (CAM 5) held in Bolivia, in Santa Cruz de la Sierra, in 2018.
Mgr. Waldo Barrionuevo, current PMS National Director appointed on 27 February, recalled Mgr. Scarpellini during the celebration of the Eucharist, as "a precious person" and highlighted that we are all called to be instruments in the hands of God: "all of us are missionaries by call and vocation of the Lord, the Lord calls each of us to witness our Father". Mgr. Scarpellini accompanied the Bolivian Church as Director of the PMS for so many years.
Mgr. Ricardo Centellas, Archbishop of Sucre and President of the Bolivian Bishops' Conference, underlines: "We have physically lost a brother, but his spirit will always accompany us, this spirit of struggle and work, especially of an unshakable belief in the dynamics of the mission, he was convinced that the Church should live its missionary dimension". The Archbishop recalls Mgr. Scarpellini as the great missionary who gave his whole life for the Bolivian Church, a Bishop who was always at the service of the Bolivian Bishops' Conference: "from the PMS, from the diocese of El Alto, he motivated the Church Bolivian to go forward in its missionary experience". (SL) (Agenzia Fides, 16/7/2020)

ASIA/INDONESIA - The Camillians in Flores: keeping missionary commitment alive and looking to the future with hope

AFRICA/IVORY COAST - The 80th National Council of the PMS has opened: clergy and laity called to the responsibility of instilling the missionary spirit

VATICAN - Pontifical Society of St. Peter the Apostle: the mission needs the support of all the people of God

ASIA/SOUTH KOREA - Cardinal Yeom: Bishop You to the Congregation of the Clergy is "a great gift"