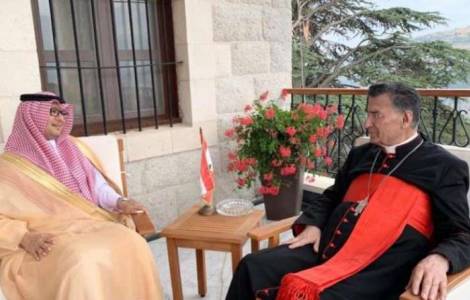 Beirut (Agenzia Fides) - The recent appeal of Maronite Patriarch Bechara Boutros Rai to internationally support Lebanon's position of neutrality on Middle Eastern geopolitical scenarios is beginning to arouse eloquent reactions from national and regional political stakeholders. The expressions of attention and consent aroused by the words of the Patriarch unite different political and geopolitical subjects, united by the alarm for the current Lebanese political-institutional crisis, but also by the intolerance for the axis of alliances on which the current national government stands, and for its positioning on regional and global geopolitical scenarios.
On Sunday 5 July, in the homily delivered during Mass, Cardinal Rai developed what the media presented as a "national refoundation" speech, in the face of the systemic crisis experienced by the Country of Cedars. In his speech, among other things, the Primate of the Maronite Church asked Lebanese President, Maronite Michel Aoun, to break what the Patriarch defined as a "siege" placed on the "free national decision" so that the effective exercise of national sovereignty is restored. The Patriarch also called on the UN, the international community and the Arab nations to recognize and guarantee Lebanon's "neutrality".
After the Patriarch's homily, several stakeholders from the national and regional political scene wanted to show their willingness to join a new "national pact" based on the contents recalled by the Primate of the Maronite Church.
On Tuesday 7 July, the Patriarch received Saudi ambassador to Lebanon Walid el-Bukhari in the patriarchal summer residence of Diman, who thanked the Cardinal for the appeals contained in his Sunday homily regarding the need to preserve Lebanese neutrality and keep Lebanon out of regional conflicts. On Thursday 9 July, ex-Lebanese Prime Minister Saad Hariri, leader of the "Future" Sunni Party, also wanted to meet Patriarch Rai, to express full support for the Cardinal's appeal during his Sunday homily. "Lebanon", said Hariri after meeting with the Patriarch "is paying the price for regional conflicts and everyone knows why, but that does not mean that we cannot start a dialogue among us to get out of the crisis. Each side - added Hariri, with evident reference to the Iran-linked Shi'ite Hezbollah party - must make a sacrifice, but some must sacrifice more than others. "Attention and consensus for the prospect indicated by Cardinal Rai also came from Samir Geagea, leader of the Lebanese Forces. Meanwhile, French Foreign Minister, Jean-Yves Le Drian, according to journalistic rumors, is expected in Lebanon for next week, and should bring with him an important financial contribution in support of the French-speaking Lebanese schools. US Secretary of State Mike Pompeo, in recent statements regarding the Lebanese crisis, reaffirmed the US Administration's commitment to remove Lebanon from any form of dependence on Iran. According to local sources, relaunched by the Lebanese media, Maronite Patriarch Bechara Rai could soon go to Rome to expose a Document-Appeal to defend the neutrality of Lebanon at the Vatican , elaborated with the collaboration of intellectuals and scholars close to the Maronite Patriarchate. (GV) (Agenzia Fides, 10/7/2020)