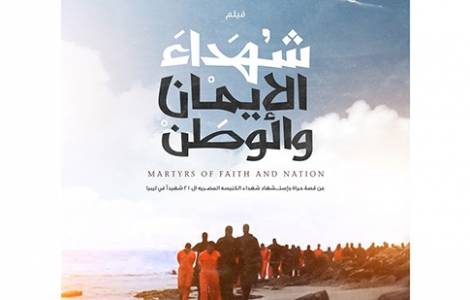 2020-07-28
The Monastery of St. Macarius commemorates Abbot Epiphanios, two years after his assassination

2020-07-18
Grand Mufti Shawki Allam: "There is no objection to building churches with Muslim money"

2020-07-16
Alarm of the Coptic Churches: there are those who give "false Bibles" and "false Gospels" contrary to the Christian faith

2020-07-09
In al Moqattam church and mosque built on the same ground, in the sign of national unity

Samalut (Agenzia Fides) - The first cinematographic work dedicated to the 20 Coptic Christians beheaded in 2015 by the jihadists together with their Ghanaian workmate will be entitled "Martyrs of the faith and the nation". The initiative starts with the blessing of Coptic Orthodox Patriarch Tawadros, and will be carried out under the supervision of Anba Pavnotios, Coptic Orthodox Bishop of Samalut.
In a recent press release issued by the same diocese of Samalut, the imminent start of filming was announced, already last January and postponed due to the coronavirus epidemic. The collection of testimonials and materials useful for the drafting and revision of the script, entrusted to the writer Mina Magdy, already started a long time ago. The text of the script is also based on the stories of the family members of the martyrs, almost all natives of the Samalut region. Before reaching the climax of the scenes concerning the martyrdom, the discovery of the bodies in a mass grave and the return of the remains to Egypt, the text to be transformed into a film traces the lives of young Copts killed by jihadists, caught in the warp of their daily and family life, marked by efforts, hopes and desires for a better future. The same desires that had pushed the martyrs also to emigrate to Libya, looking for a decent and useful job to support their families.
The direction of the work is entrusted to the filmmaker Yussef Nabil. The announcement of the plan of the work and of the beginning of the works - explains on Wataninet.com Nader Shoukry, member of the commission charged with reviewing the script - also aims to seek subsidies to support the ambitious work plan. The press release issued by the diocese of Samalut also reports the message released by the filmmakers involved in the project, who ask everyone "to pray that the Lord will complete the work with us, helping us to make the film in the best way, so that it becomes a testimony of the strength of the martyrs, for all future generations".
The 20 Egyptian Copts and their Ghanaian workmate were kidnapped in Libya in early January 2015. The video of their beheading was put online by jihadist websites on February 15th. Just a week after the news of the massacre, Coptic Orthodox Patriarch Tawadros II decided to register the 21 martyrs in the Synaxarium, the book of the martyrs of the Coptic Church, establishing that their memory is celebrated on 15 February.
The mortal remains of the Copts killed in Libya by the jihadists were identified at the end of September 2017 in a mass grave on the Libyan coast, near the city of Sirte. Their bodies had been found with their hands tied behind their backs, dressed in the same orange suits that they wore in the macabre video filmed by the executioners at the time of their beheading.
This year, the "Coptic martyrs of Libya" were celebrated in a solemn form in the Coptic Orthodox diocese of Samalut on the fifth anniversary of their martyrdom. The celebrations, which took place from 1st to 16th February, took place at the church and at the museum-shrine dedicated to martyrs, built in record time in Samalut with the concrete support of the Egyptian government.
"The video depicting their execution – said Anba Antonios Aziz Mina, Coptic Catholic Bishop emeritus of Guizeh after the massacre of the 21 martyrs, to Agenzia Fides - was built as a horrendous film staging, with the intent to spread terror. Yet, in that diabolical product of fiction and bloodthirsty horror, it is seen that some of the martyrs, in the moment of their barbaric execution, repeat 'Lord Jesus Christ'. The name of Jesus was the last word on their lips. As in the passion of the first martyrs, they entrusted themselves to the One who would soon welcome them. And so they celebrated their victory, the victory that no executioner can take away from them. That name whispered in the last moment was like the seal of their martyrdom". (GV) (Agenzia Fides, 8/7/2020)

ASIA/LEBANON - Patriarch Rai: "mysterious explosion" in Beirut. We ask everyone for help

ASIA/LEBANON - Patriarch Rai: "mysterious explosion" in Beirut. We ask everyone for help

EUROPE/FRANCE - In the memory of Father Hamel, the rejection of all violence and respect for human life