AFRICA/DR CONGO - UN report: more than 1,100 people killed by Ugandan rebels in just over a year in the east of the Country 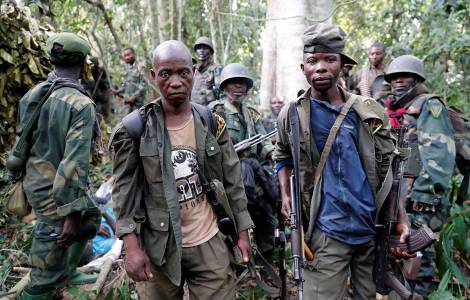 Kinshasa (Agenzia Fides) - There are 397 cases of human rights violations attributable to ADF (Allied Democratic Forces) between 1 January 2019 and 31 January 2020, with the killing of at least 1,154 people, including 235 women and 166 children. This was stated in a report by the United Nations Joint Human Rights Office (UNJHRO), prepared together with the United Nations Organization Stabilization Mission in the Democratic Republic of the Congo (MONUSCO) and the United Nations High Commissioner for human Rights (OHCHR).
The report documents human rights violations and serious violations of international humanitarian law committed by fighters of the Allied Democratic Forces (ADF) and members of the defense and security forces of the Democratic Republic of the Congo against civilians in the territory of Beni, province of North Kivu and in the territories of Irumu and Mambasa, Ituri province, from 1 January 2019 to 31 January 2020.
The human rights violations committed by the ADF documented in this report include violations of the rights to life, physical integrity, freedom and security of the person and property rights. Violations of international humanitarian law include the recruitment of children, forced labor, attacks on hospitals and a school.
Soldiers of the armed forces of the Democratic Republic of the Congo (FARDC) and agents of the Congolese national police (PNC) also committed human rights violations, especially in the context of military operations launched since October 2019, in particular violations of the right to life, physical integrity, freedom and security of the person and property.
"Despite the health and safety risks associated with the Ebola epidemic in the territory of Beni and the large-scale military operations initiated by FARDC since October 2019, UNJHRO has been able to document numerous human rights violations committed by the ADF against the civilian population, through fact-finding missions in the field and collaboration with local partner networks", says the document sent to Agenzia Fides. This sharp increase in the number of human rights violations - almost 69% - over the previous year stems from the combination of three factors, in particular the expansion of the area affected by the lethal attacks by the ADF beyond the national road number 4 ( RN4) due, among other things, to the destruction of their bases and their living environment during military operations, the reprisals against the civilian population and the emptiness left by the closure of some MONUSCO bases for budgetary reasons and finally by the absence of FARDC soldiers from some areas.
UNJHRO has documented 109 victims of human rights abuses committed by FARDC soldiers and 137 victims of human rights violations perpetrated by PNC agents, including elements of the Legion of National Intervention (LNI).
Since 1986, the ADF, an armed rebel group of Ugandan origin, has raged in the east of the DRC, in particular in the areas of Watalinga and Beni-Mbau, in the Virunga National Park, in a triangle located between the towns of Mbau, Kamango and Eringeti. This area was designated as the "death triangle" in 2014 due to the continuous massacres of civilian populations by the ADF.
The Congolese human rights organization CEPADHO (Center for the Promotion of Democracy, Peace and Human Rights) welcomed the publication of the report but criticized "the UN that describes the crimes committed by the ADF as "war crimes and crimes against humanity". According to the statement of CEPADHO, sent to Fides, it would be better for the UN to qualify these actions as "terrorism", so that all the States of the world mobilize to end the actions of the ADF through military and judicial actions". (LM) (Agenzia Fides, 8/7/2020)

VATICAN - Pope recalls violence in Cameroon: "May the guns fall silent and the safety of all be guaranteed"