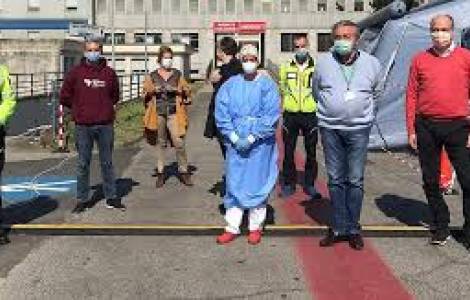 2022-05-03
Looking at realities with the eyes of Jesus: the Camillian missionaries open the LIX General Chapter

2022-04-25
A march to stop the war and its escalation: take the word out of arms and give it back to politics

2022-04-12
"Before God there are no second-class children": Father Maccalli remembers the victims of jihadist terrorism

Padua (Agenzia Fides) - After three months of total lockdown that has blocked every flight and every airport, the first 16 volunteers of the Doctors with Africa CUAMM are about to leave for Africa. Many of the CUAMM volunteers remained alongside the local populations, in a time of coronavirus emergency, in addition to all the other crises. "Impossible to 'go away' from those places, for us who of that 'Eunte scurate infirmos' have made a choice of life. However, it was also impossible to be able to take over the shift from the many who remained on the spot, close to the population during the great fear that the pandemic, especially at the beginning, caused and which still exists", writes to the Agenzia Fides don Dante Carraro, director of CUAMM.
"Many organizations have decided to return thanks to the rare humanitarian flights available. Our staying on the spot, which proves to be tiring and risky - underlines the priest - is helping to keep hospitals and services open, avoiding the collapse of already very weak and fragile health systems. Together with our local colleagues we increase hope day by day".
"Among the health and socio-economic consequences of Covid we see with our own eyes how the number of families and people asking for food is dramatically increasing. Hunger is around the corner. In many communities in southern Sudan, in rural areas, we are already distributing flour, rice, oil and basic necessities. In Angola, in Chiulo, mothers who come to the hospital to ask for food for their children increase".
"We need financial resources but above all human resources, volunteers available and ready to go. Even in our country wounds are open, they bleed and hurt - don Dante writes -. We experience anxieties and difficulties, uncertainties and worries, especially for the future. The rubble caused by the virus risks sinking us, blocking us above all in our wills: we risk a lockdown of the soul".
"In the 16 volunteers who leave, I see Francesco Canova, who 'invented' CUAMM as soon as the Second World War ended: around it only poverty, misery, destruction and rubble. When the temptation to give up, to lower your arms, to give up, is stronger than that, that's when you have to go, have more courage, more determination in rebuilding".
The director of CUAMM, a cardiologist, expressed his gratitude to the 16 volunteers who, by leaving, among the rubble of the virus, keep alive the "missionary" and spirit of service that allowed the birth of CUAMM in 1950. Don Dante concludes by adding that "with this spirit in our hearts, which remains alive despite the fatigue of such a difficult time, we want to celebrate our seventieth birthday this year scheduled for 7 November in Padua". (DC/AP) (Agenzia Fides, 7/7/2020)

AMERICA/MEXICO - The mission of the politician: a vocation at the service of national reconciliation and the construction of the common good

ASIA/KAZAKHSTAN - The encounter with God in the city of Kapchagay