OCEANIA/PAPUA NEW GUINEA - The bishops remember Blessed To Rot, second generation Christian, an example of persistence in these times of lockdown 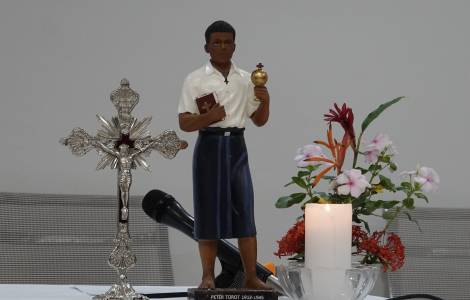 2021-03-16
"Life Matters": respect and dignity of life, the Church helps young people to grow in faith

2021-03-02
The objective of the Catholic means of communication: to be credible witnesses of the Gospel message

Port Moresby (Agenzia Fides) - The 61st Annual General Assembly of the Episcopal Conference of Papua New Guinea and Solomon Islands (PNGSI) ended yesterday, 2 July 2020.
About 50 people took part in the celebration, including 17 bishops, 2 administrators, CBC staff, men and women religious and lay faithful.
The Mass was presided over by the Archbishop of Madang, Mgr. Anton Bal, who is also the newly elected president of the Catholic Episcopal Conference of PNGSI. Card. John Ribat, MSC, new Archbishop of Rabaul, Mgr. Rochus Tatamai, MSC, and the Bishop of the diocese of Bereina, Mgr. Otto Separy new vice president of the PNGSI CBC were also present.
The Eucharist was dedicated to the life of Blessed Peter ToRot on the occasion of the 25th anniversary of his beatification and 75th of his martyrdom, brought to support the holiness of the laity, theme of the General Assembly (see Fides, 26/6/2020).
The homily was delivered by Archbishop Tatamai, a close descendant of the Blessed's family, who highlighted ToRot's life, testimony and example as a man of courage and fortitude in faith, as well as determination to follow Jesus Christ with his life until his death. In his homily, the Archbishop recalled Blessed ToRot from the moment his parents became first generation Christians when the missionaries landed on the island of Matupit in 1882. ToRot was a second generation Christian who followed in the footsteps of his parents. He was a family man, catechist, teacher and died a martyr in defense of his Christian faith, after working hard with discipline and obedience to become a good teacher and catechist. When he married he lived a married and family life according to the teachings of the Gospel. He defended the values of marriage and resisted the traditional culture of polygamy and the laws of the Japanese imperial army, and died supporting his faith. ToRot left behind many great examples of obedience, exemplary family life, he was an excellent teacher, catechist, man of prayer, respect and faith. He lived and represented his faith even when some members of his family betrayed him. Lay people in particular are challenged to continue his example especially in the difficult and uncertain times of today. In fact, ToRot was born in a period of lockdown during the Second World War, where even then restrictions on the activities of the Church persisted, but he persevered in his pastoral work of teaching and catechesis. Archbishop Tatamai therefore urged all those present to be persistent and continue to grow in faith in this period of lockdown caused by Covid-19 following in the footsteps of their compatriot.
At the end of the Assembly, CBC staff paid tribute and greeted Archbishop Emeritus Francisco Panfilo, SDB, who took part in his last AGM of bishops having reached the age limit.
Described as the voice of the voiceless and a beacon of hope for the small people he was thanked for his leadership as a servant to the people of Alotau-Sideia, Rabaul and PNG. (AP) (Agenzia Fides, 3/7/2020)

AMERICA / CHILE - "Schools closed, but the mission continues even amidst difficulties": the commitment of the Salesians in times of pandemic

AMERICA / CHILE - "Schools closed, but the mission continues even amidst difficulties": the commitment of the Salesians in times of pandemic

AMERICA/PARAGUAY - Archbishop of Asunción appeals to pharmaceutical companies: "It is not the time to make money at the expense of the sick"

AFRICA/MOZAMBIQUE - Humanitarian situation is increasingly alarming; the Bishops "Perspectives should be given to young people to stop the war"