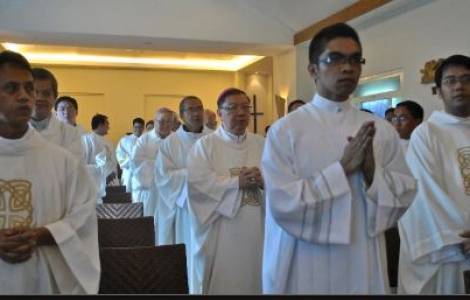 Manila (Agenzia Fides) - The anti-terrorism bill has "vague, amorphous and deleterious" provisions that will only do more harm than good to the people. The bill very clearly and concretely derogates from some established legal principles that are aimed at protecting fundamental human rights. With these observations, the priests of the Archdiocese of Manila openly share the appeal of several civil society groups who, alarmed by the possible consequences, have invited President Rodrigo Duterte not to sign the anti-terrorism law, approved at the beginning of June 2020.
In a joint statement by the Manila clergy, sent to Fides, it states: "One’s freedom of expression, rights to privacy, property, ownership, and freedom of movement are not anymore guaranteed under this bill as it allows spying, confiscation of properties, and detention beyond the legally allowable time". "This bill - continues the statement - gives draconian powers to State agents, which, as history will tell us, are almost always abused and mis-used", also because the text of the law contains "ambiguous and expansive provisions" which are also left open to arbitrary and whimsical interpretations.
"Even legitimate dissent or criticisms, which are signs of a healthy and working democracy, may be misconstrued as inciting to commit a terror act. Weaponizing this measure to silence critics and detractors will give this government a free-pass even for its inefficiency, ineptness, and abuses", say the priests.
The Manila clergy therefore claim to be against the bill that "as it is contrary to the demands of the moral order, to the fundamental rights of man, and to the teachings of the Gospel". The state must guarantee security "within the bounds of existing democratic principles and processes". "The government should not make as an excuse the upholding of national security while undermining human rights and civil liberties. To do so makes the government terrorism against its own people", reads the statement.
The staement of the priests of the archdiocese echoed the arguments of the former associate judge of the Supreme Court, Antonio Carpio, who promised to contest the constitutionality of the new anti-terrorism law if the President signs it, decreeing its entry into force. In recent days, Bishop Jose Colin Bagaforo of the Secretariat for Social Action in the Catholic Bishops' Conference has also invited the Supreme Court to examine the "constitutionality" of the bill because "it endangers the rights of the Filipinos", he said.
The country's largest Catholic schools and institutions have urged the president not to sign it. The Vincentian Family, which brings together 14 religious, male and female congregations and lay organizations, which recognize themselves in the charism of St. Vincent de Paul, has publicly criticized the bill.
Human rights activists, Catholic leaders, lawyers, academics, priests and religious have opposed the controversial new anti-terrorism law. The Philippine Congress passed the counterterrorism law on June 3, 2020, with 173 legislators voting in favor, 31 against and 29 abstentions. Now only the signature of President Duterte is needed to make it become law in all respects: an apparent formality, since his government was the promoter of the text of the law. (SD-PA) (Agenzia Fides, 3/7/2020)

ASIA/IRAQ - Patriarch Sako to the government: a law on personal status is needed that respects the identity of Christians