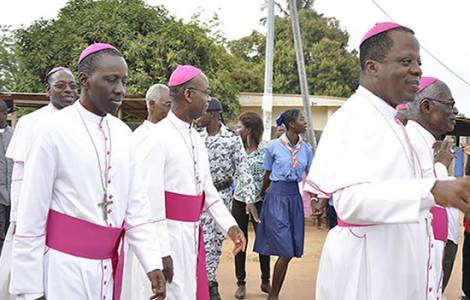 2020-07-27
Bishops in plenary assembly: health, social and political crisis at the center

2020-07-15
"Thanks for the good seeds that you have sown during your life": the Church remembers the late Prime Minister Coulibaly

Abidjan (Agenzia Fides) - Four months before the presidential elections, scheduled for October 31, 2020, while politicians carry out their election campaigns, many observers are attentive to the role of the Church in particular and religious forces in general in this critical period. In fact, political tensions in the country do not tend to decrease, especially after the government issued an arrest warrant against the former rebel leader and future presidential candidate, Guillaume Soro, on December 23, 2019 (see Fides, 2/1/2020). The country, between 2002 and 2011, was split geographically into two by an armed conflict that caused thousands of deaths in addition to serious electoral crises.
"For the first time, after the tragic presidential elections in 2011, all political parties have decided to participate - writes Fr. Donald Zagore, Ivorian theologian of the Society for African Missions (SMA) to Agenzia Fides. This is a big step forward for the Ivory Coast".
Outgoing head of State, Alassane Ouattara, has announced that he will not run for a third term in accordance with constitutional constraints. His party's candidate, Prime Minister Amadou Gon Coulibaly, is however accused by the opposition of using Covid-19 containment as an excuse to revive his image.
"The political crises that the country has experienced over the years arose from the lack of an electoral culture - declares Fr. Zagore. Mobilizing the whole population to an active participation, training and promoting consciences towards an electoral culture based on the principle of a contradictory and democratic debate in the strict respect of people, relationships, structures, institutions and values for the benefit of the common good, must be the main objectives".
“As long as we remain firm in the dynamic of mutual accusations, peace, reconciliation and social cohesion will remain difficult challenges and violence will always have the last word. Voting is a fundamental right, - concludes the Ivorian missionary - but it is our undeniable duty to do it responsibly and with mutual respect. The elections of October 2020 should not be a revenge, but rather a sacred gift that history has made for us to show the world that we have grown and that we have become a strong and upright people. Religious forces must take the field to accompany this process with their expertise and wisdom. The responsibility for peaceful elections is not only political, but also of all the nation's forces, including religious ones".
Currently, the Ivory Coast is one of the West African countries most affected by Covid-19, with 9214 registered cases and 66 deaths. On March 23, outgoing president, Alassane Ouattara, announced a national emergency and imposed some measures to prevent the spread of the virus, including a curfew from 9pm to 5am. (DZ/AP) (Agenzia Fides, 2/7/2020)

AMERICA/BOLIVIA - In the face of an increase in infections, the Bishops reiterate that "it is not wise to hold elections"