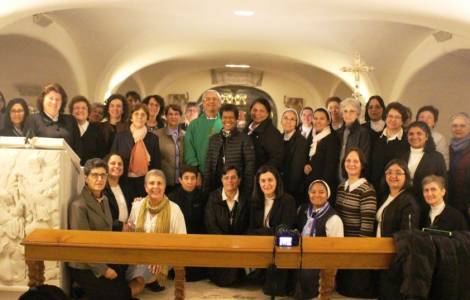 2021-06-01
Feast of Blessed Scalabrini, Apostle of migrants: we welcome the Pope's appeals

2021-05-29
Interreligious prayer for Myanmar: Buddhists and Christians call for peace

2021-04-28
Scalabrinians: humanitarian shame in the Mediterranean demands a response from the States

2021-04-27
The General Council of Comboni Missionaries: let us pray for many people who in South Sudan suffer from insecurity and violence

2021-03-25
"Covid does not take away the guarantee that Christ has risen": the presence and testimony of the Camillians does not stop

Rome (Agenzia Fides) - The commitment to support migration is a "great light" that allows us to pursue new challenges and strategies for dialogue and comparison among peoples. The opportunity to take stock of migration and to decline the commitment of the Scalabrinian charism on an international scale was a meeting, held in webinar, which led the Missionary Sisters of San Carlo Borromeo/Scalabrinians to assess the situation regarding the different communities around the world. A commitment that sees them involved in 27 countries and in the hottest border areas, where there are emergencies every day.
"It is important to network and cultivate new strategies for migration - explains Sister Neusa de Fatima Mariano, superior general of the Scalabrinians in the note sent to Agenzia Fides -. So we are stronger and live the challenges we face. The commitment we have is a 'great light' for us". In the world, in 2019 alone, 80 million refugees were forced to migrate. "We have great challenges that go through the creation of humanitarian corridors to protect human rights, the interruption of wall construction policies, the commitment to fight trafficking, being an active link in the humanitarian reception networks for women and children in vulnerable situation", explains Sister Neusa who adds: "migrants today cause change and for us they are an opportunity to confirm the Scalabrinian charism".
Three similar, but at the same time different experiences were highlighted during the international meeting, carried out by the Scalabrinians in some crisis areas in the world. The first is that of Sister Janete Aparecida Ferreira, who took part in the itinerant service of Tijuana, on the border between Mexico and the United States of America. "We want to respond to the calls of migrants and try to defend their projects and protect their lives. We are in a border area with the USA, where millions of people pass by to have a better future". Sister Rosa Maria Zanchin, on the other hand, with her 43 years of consecrated life, is in Messina. "I am in a land of emigration and immigration - she underlines - Here today there are two difficulties, one of which is that of not knowing the language of the migrant who arrives. The second, however, is the migrant's difficulty in making his story and trauma understood. Migrants are creative, they do not give up, they teach to revive life". Sister Eleia Scariot, instead, takes care of the Chaire Gynai project in Rome, shelters for women refugees with children and in situations of vulnerability. "We work with every woman, from the moment she enters the house, with a personal project that starts from the dream they have, with accompanied and controlled projects", she explains. And this is precisely the path of assistance to migrants promoted by the Scalabrinians: the care of everyone, without treating people as numbers, but aware that behind them there is always a different story. (SL) (Agenzia Fides, 30/6/2020)

AMERICA/BRAZIL - Migrant Week: "Who is knocking on our door?"

AMERICA/GUATEMALA - The US Vice President Kamala Harris advises against emigration: Bishops are calling for solutions to structural causes

AMERICA/COLOMBIA - Consolata missionaries: "Support the efforts of indigenous communities to react to the condition of abandonment and degradation"