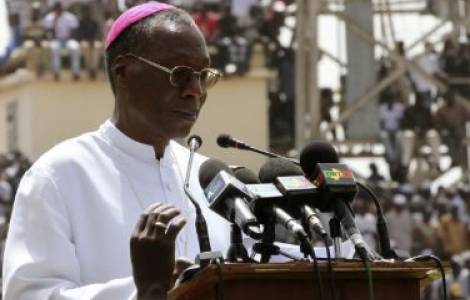 2020-06-24
Cardinal Zerbo: Catholic sentinels and mediators among violence and conflict

Bamako (Agenzia Fides) - "In the midst of this difficult situation, we religious are sentinels and act as mediators to encourage dialogue and a return to calm". In the chaos in Mali, overwhelmed by post-election political tensions, outbreaks of conflict in various areas and long-standing issue of jihadism that continues to be very active throughout the Sahel, the voice of the Cardinal of Bamako, Mgr. Zerbo, in the interview with Agenzia Fides, stands out for clarity and determination. The elections of 29 March left a Country in a state of strong political instability from which it is difficult to get out: the leader of the opposition, Soumaïla Cissè, was kidnapped two days before and is still in the hands of the kidnappers, while the population, very suspicious as well as dissatisfied with the policies of President Ibrahim Boubacar Keita in office since 2013, is calling for his resignation with mass demonstrations.
Cardinal Zerbo explains to Fides: "The political situation is quite serious. The problem at the moment is figuring out whether to hold new elections or leave everything as it is and try to find an agreement. I think it is essential to do everything to make the two groups talk, they must dialogue with each other and prevent further unrest. We have set up a group of religious, Muslim, Catholic and Protestant leaders in order to put pressure on the government and create conditions for dialogue. We meet regularly and try to speak directly with the protagonists. I believe that the religious have two main tasks. On the one hand, as Ezekiel says, to behave like sentinels, not spies: when there is a threat we must warn and try to solve the problem before it explodes, it is a very big responsibility and if there are so many problems it means that the sentinels did not carry out their job well. Then we must be intercessors and when there is hostility between two groups, families or people, we have to mediate in truth. It is also essential to always keep prayer alive for the Country and for the protagonists so that God converts the heart. Now, it can be said, that the heart of many is of stone, it is up to us to make it flesh. Religions here seek a common line to promote peace".
UNHCR raises the alarm in the whole of Sahel for the resurgence of armed clashes and the consequent wave of exoduses of tens of thousands of civilians. In the Mopti area, in the center of the Country, further clashes have occurred recently with the death of many people. The killing, announced by France, of Abdelmalek Droukdal, historical leader of the terrorists in action in the area, will hopefully ease the pounding advance of the jihadist groups, but the tension, on various fronts, remains very high.
The Cardinal notes: "A real conflict is taking place in our Country. It would be important to understand what interests are behind it, because people, beyond more or less serious disputes, have always tried to live together peacefully and solve problems in a traditional way, without resorting to weapons. Now, however, weapons have invaded Mali. There is a lot of confusion and it is not clear what kind of war is going on. Our intention is to talk to the parties in conflict, my fellow citizens have lived together for centuries, we cannot accept that they are now at war. With repeated meetings we try to encourage dialogue".
The number of refugees has doubled since 2018. To date, 210,000 internally displaced persons, and already 73,000 Malians forced to flee from January to the end of May this year. "The population runs away from conflict because, in addition to the danger of weapons, markets are empty and there is difficulty to move. The Church is active through Caritas, we are a minority and we do not have much, but we share what we have. We also asked Caritas Internationalis to come to our rescue", concludes Cardinal Zerbo. (LA) (Agenzia Fides, 24/6/2020)