AMERICA/BRAZIL - Is the freedom of movement of goods worth more than that of people? 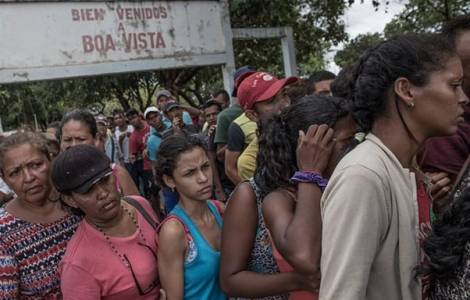 Brasilia (Agenzia Fides) - The Church in Brazil celebrates World Refugee Day with a series of programs and debates on the situation of people forced to leave their land and country that concludes the "Migrant's Week". "Where is your brother, your sister?", is the question that constitutes the theme of the 35th edition of Migrant's Week, celebrated in Brazil from 14 to 21 June, to promote acceptance, integration, defense of migrants' rights (see Fides, 15/6/2020).
According to data released by the National Refugee Committee (CONARE), in the 4th edition of the "Refúgio em Numbers" report, Brazil recognized, in 2018, only 1,086 refugees of different nationalities. Thus the country reaches the number of 11,231 people recognized as refugees by the Brazilian State. Of this total, Syrians represent 36% of the refugee population, followed by Congolese, 15%, and Angolans, 9%.
As highlighted by the information released by the Brazilian Bishops' Conference (CNBB), 2018 was the year with the highest number of requests for recognition of refugee status, as a consequence of the increase in the flow of displacement of Venezuelans. Last year there were over 80,000 requests, including 61,681 from Venezuelans. Haiti, with 7 thousand requests. Followed by the Cubans (2,749), the Chinese (1,450) and the Bengali (947). The states with the highest number of requests in 2018 are Roraima (50,770), Amazonas (10,500) and San Paolo (9,977).
The Archbishop of Belo Horizonte and President of the CNBB, Walmor Oliveira de Azevedo, in his message states that when looking at every migrant and refugee it is necessary to see a brother and sister who have come from another place with different habits and customs. Refugees, according to the Archbishop, integrate and form the family of humanity.
The President of the CNBB draws attention to the fact that freedom for the movement of goods is growing while the persecutions of migrants and refugees are multiplying: "Objects and goods are valued more than people. There is no solidarity for those who need to leave their countries because of misery, wars, religious persecutions and many other forms of violence". (SL) (Agenzia Fides, 20/6/2020)

AFRICA/SENEGAL - Covid-19; The Bishops of Senegal postpone the opening of the churches

AFRICA/MOZAMBIQUE - Wave of IDPs in the northern province, caused by violence and destruction