AFRICA/MOZAMBIQUE - Bishops’ appeal: "Put an end to the atrocity and violence in Cabo Delgado": 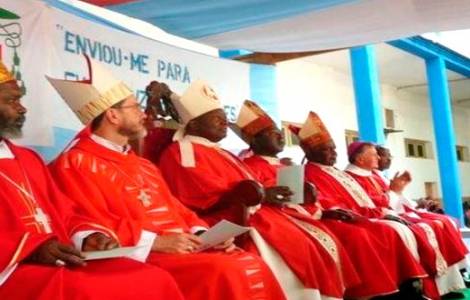 2020-09-18
Solidarity campaign "Together for Cabo Delgado" to assist over 250,000 displaced people in the diocese of Pemba

2020-09-09
Pandemic and violence in Cape Delgado: the solidarity of the Bishops of southern Africa

2020-07-10
The alarm of the missionaries: New jihadist attack in the North destroys church, hospital, houses

2020-06-23
Wave of IDPs in the northern province, caused by violence and destruction

Maputo (Agenzia Fides) - Putting an end to "many atrocities" and "acts of real barbarism" perpetrated in the Cabo Delgado region: is the appeal of the Episcopal Conference of Mozambique (CEM) at the conclusion of its first Plenary Assembly, held from June 9 to 13, at Sant'Agostinho da Matola seminary, near Maputo.
At the end of the works, the Bishops issued a Message addressed in particular to the faithful of Cabo Delgado who, for three years, have been victims of attacks by Islamic militias. Thousands of people have been killed by these attacks and more than 200,000 inhabitants of the area have been displaced, the Bishops complain. A dramatic situation, also stressed in Pope Francis' "Urbi et Orbi" message on Easter Sunday.
"An urgent response to this tragedy is needed - they say in their message -. Action must also be taken on the causes of the conflict through the promotion of development projects and the provision of essential services, such as those related to health and education".
The strong appeal of the Mozambican Episcopal Conference follows that launched by the Bishops of the Ecclesiastical Province of Nampula, in northern Mozambique, which includes Cabo Delgado (see Fides, 29/5/2020).
"The attacks started about two and a half years ago, but lately they have gained a terrifying pace and dimension, with several attacks simultaneously, in villages far from each other, which makes it even more difficult for the police and the military from Mozambique to act", explains His Exc. Mgr. Luíz Fernando Lisboa, Bishop of Pemba.
According to Mgr. Lisboa "rather than conquering the territory with the force of arms, these men with covered faces sow panic, with the aim of forcing people to flee and leave the villages in which they live. Since the first attacks, the pattern has been the same: "Burn houses, kill people brutally, cut off heads"
The Bishop of Pemba guarantees that, in Cabo Delgado, "all religions get along" and that Islamic leaders "from the outset said that they have nothing to do with jihadists. The region is rich in hydrocarbon resources, but due to the violence of the jihadists there are 25 billion investments blocked in the natural gas sector alone".
In their message the Bishops recall the difficult situation caused by the confinement measures to contain the Covid-19 pandemic. So how can we live faith in this context? CEM focuses on the family, the "domestic Church", which has seen many moments of prayer at home during this period. Equally important is the relaunch of the mass media as an instrument of evangelization, together with the commitment of all to be ever more a merciful, Samaritan "Church", close to those who suffer and to the people affected by the pandemic".
CEM also launches an appeal to "not stigmatize Covid-19 patients, but to be in solidarity with them". "It is necessary - the Bishops also write - to show equal attention to the poorest people, whose conditions have worsened with the health crisis". On the other hand, CEM reaffirms its commitment in the social sector, carried out through Caritas, and the intention of wanting to form a working group "in permanent contact with the Ministry of Health" to establish methods and times for the recovery of public liturgical celebrations. (L.M) (Agenzia Fides, 19/6/2020)