AMERICA/ARGENTINA - "We are all Amazon": Mgr. Ojea calls for anti-Covid emergency measures also for the inhabitants of the Amazon 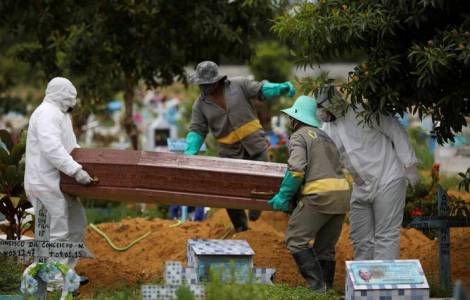 2020-07-25
The crime of human trafficking is not in isolation or under quarantine: half a million people involved

2020-07-18
The commitment of the Salesians in the fight against Covid-19: "To act from the heart, with transparency and sustained in faith"

Buenos Aires (Agenzia Fides) - The Bishop of San Isidro and president of the Argentine Episcopal Conference, Mgr. Oscar Vicente Ojea, participated in a virtual meeting in which, together with the specialists, talked about the desperate cry of the Earth and the poor in the Amazon, whose drama today has been deepened by the devastating effects of the coronavirus pandemic. The activity, with the motto "Todos somos Amazonia", was organized by the University of San Isidro (USI) and promoted by the group for Higher Diploma in Integral Ecology.
In addition to the Bishop of San Isidro, also Father Mauricio De López, executive secretary of the Pan-Amazonian Ecclesial Network (Repam); Susana Nuin, of the Latin American Council for Social Sciences (Clacso); the rector of the National University of Jujuy, Rodolfo Tecchi and Sandra Lassak, for the German Catholic Agency participated.
Mgr. Ojea opened the meeting by recalling the pre-Synod on the Amazon: "Through Repam, an impressive job was done to prepare the questions and consult the people of God for the preparation of the Synod. Then the answers, more than 80,000, on behalf of the members of our communities". "Therefore, when we arrived last year, we already had a working document prepared with the participation from the people of God", he highlighted.
Referring to the result of this participation, the Bishop said that the Church has found a disfigured Amazon, "crossed by a river of over 7 million square kilometers, an impressive territory with 20% of the world's oxygen reserves, forests and the richness of biodiversity, all disfigured by mistreatment; from extraction without control, from water pollution, from desertification, from indiscriminate felling of trees, from the extinction of species".
At the end of his speech, Mgr. Ojea said that "in the midst of this context of predation, of mistreatment, we have the pandemic, and we want to give particular visibility to this", and concluded by saying: "We want to share the situation humanitarian emergency with our brothers". (CE) (Agenzia Fides, 17/6/2020)