ASIA/IRAQ - New Prime Minister al Kadhimi visits Mosul and the Nineveh Plain: "Christians, one of the most authentic members of the Country" 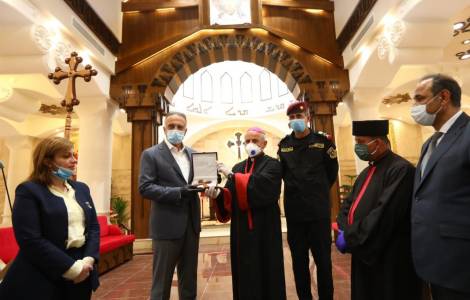 Mosul (Agenzia Fides) - "Christians represent one of the most authentic components of Iraq, and it saddens us to see them leave the Country". With these words, new Iraqi Prime Minister Mustafa al Kadhimi, on behalf of the whole country, expressed bitterness and apprehension due to the silent exodus of Christian communities who for centuries have been living in the territories of ancient Mesopotamia. The externalization of the new Prime Minister took place during his visit in Mosul and in the Province of Nineveh on Wednesday 10 June, six years after the jihadist militants of the Islamic State (Daesh) conquered the northern Iraqi metropolis. During the visit, the Prime Minister had meetings with representatives of local Christian churches and communities, including the Chaldean Archbishop of Mosul, Dominican Najib Mikhael Moussa. Chaldean Christian Evan Faeq Yakoub Jabro, recently appointed Minister for Refugees and Migrants in the government led by Mustafa al Kadhimi, was also included in the delegation that accompanied the Pime Minister on his trip to northern Iraq (see Fides, 8/6/2020).
Mosul was the de facto capital of the self-styled Islamic State from 2014 to 2017, before being taken by the jihadists by a military campaign supported internationally by the United States of America. During the 9-month battle for the recapture of the northern Iraqi metropolis, thousands of civilians died, the further exodus of hundreds of thousands of displaced people and the buildings - including those in the historical part - were largely destroyed.
To explain the state of abandonment which Mosul is currently facing, al Kadhimi - former director of the Iraqi Secret Services, who has been Prime Minister since 7 May 2020 - called into question the responsibilities of former dictator Saddam Hussein and of the governments following the invasion of the Country by the international anti-Saddam coalition which in 2003 led to the fall of the Baathist regime. The new Iraqi government, inaugurated in May with the explicit placet of the current US administration, according to the new Prime Minister inherited "a heavy task", the result of "mismanagement and corruption". During his visit to the Province of Nineveh , al Kadhimi also visited the city of Bartella, 21 km east of Mosul, an urban center inhabited mostly by Christians before the occupation of Daesh, and which now sees the population component represented by the Shabaks grow.
The Prime Minister's visit to Mosul and Bartella gave way to some local Christian representatives to re-express their considerations and concerns regarding the progressive alteration of the demographic balance that is taking place precisely in the Nineveh Plain, a region of historical roots of the indigenous Christian communities in the territories of present-day Iraq. Most of the local Christians, who fled their homes in the summer of 2014 in the face of advancing jihadist militias, found refuge in the autonomous region of Iraqi Kurdistan and in other Middle Eastern or western Countries. The number of Christians of that province who have returned to their homes remains small, while other components - starting from the Shiites - are taking more spaces in villages and small cities desertificated by the trauma of the jihadist occupation and the subsequent military campaign conducted on several fronts to bring down the Islamic State and regain control of Mosul and the whole Province of Nineveh. (GV) (Agenzia Fides, 12/6/2020)