AMERICA/BRAZIL - "Covid-19: now more than ever, urgent need to protect children and adolescents from child labor" 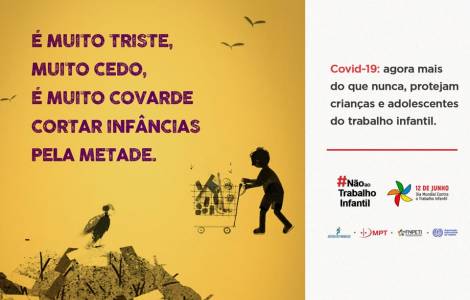 Brasilia (Agenzia Fides) - The Church of Brazil joins the World Day against the exploitation of Child Labor, which is celebrated throughout the world today, June 12th. As Pope Francis recalled at the end of the general audience on Wednesday 10 June, "given the current health crisis in various countries, many children are forced into jobs that are inappropriate for their age, so as to help their own families who are in conditions of extreme poverty. Many cases are forms of slavery and confinement, resulting in physical and psychological suffering. We are all responsible for this. I appeal that every effort be made on the part of institutions to protect minors, by filling the economic and social gaps that underlie the distorted dynamic in which they are unfortunately involved. Children are the future of the human family: all of us are expected to promote their growth, health and tranquility!"
Although constitutional rules in Brazil establish the rights and protection of children, adolescents and young people, according to the United Nations Children's Fund (Unicef), 61% of its children and adolescents are affected, in some way, by poverty, some forms of child labor or they cannot access to education, information, housing, water and sanitation. The data of the Pesquisa Nacional por Amostra de Domicílios (PnadC) reveal that in 2016 there were 2.4 million children and adolescents, aged 5 to 17, engaged in child labor, representing 6% of the population (40.1 millions) in this age group. Between 2007 and 2019, 279 children and adolescents aged 5 to 17 died and 27,924 suffered serious accidents while at work. During the same period, 46,507 children and adolescents suffered some kind of damage to health due to work.
As the note of the Bishops’ Conference of Brazil informs, sent to Fides, the 9 o'clock mass at the National Shrine of Nossa Senhora Aparecida, in Aparecida, will be celebrated at the central altar of the Shrine, and will be dedicated to children and adolescents.
According to the promoters, this is a way to attract the attention of public bodies and companies and to join in the work of raising awareness on the harmful effects of child labor. During the celebration of the Mass, the "Carta de Aparecida" will be read against child labor.
The Brazilian Bishops’ Conference (CNBB) and the Pastoral Care of Minors, which forms the network of the National Forum for the prevention and eradication of child labor (FNPETI) in the states, support various targeted initiatives on this date, together with various institutions and civil society entities, with the aim of raising awareness of the extremely high number of children who, far from school and childhood, work in unworthy conditions. They also intend to demonstrate that child labor is one of the most harmful forms of exploitation for the full development of human beings and a serious violation of the fundamental rights of children and adolescents. In this pandemic context, the initiative has the motto "Covid-19: now more than ever, urgent need to protect children and adolescents from child labor". (SL) (Agenzia Fides, 12/6/2020)

AFRICA/UGANDA - Missionary Childhood Day: children can be saints even with the little means they have

ASIA - Pandemic and children's rights: thousands of children pushed onto the labor market