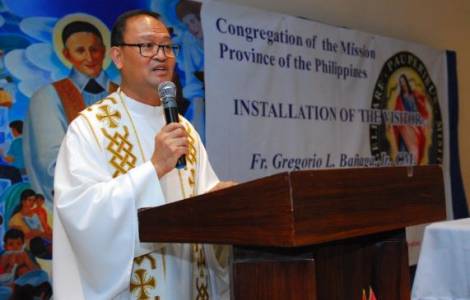 Manila (Agenzia Fides) - "We, the Vincentian Family in the Philippines, call on our government to face the poverty and suffering of our people, exacerbated by a health crisis caused by a feared COVID-19 virus. We must take care of the poor because they are the hardest hit. They are already scared and threatened, not only by the virus, but also by hunger and pain. We should not threaten them more with oppressive laws, which endanger their lives and freedoms": this is what a statement of the Vincentian Family in the Philippines reports, which unites 14 religious, male and female congregations, and lay organizations that recognize themselves in the charism of St. Vincent de Paul, criticizing the recent anti-terrorism law approved by the parliament of the Philippines.
"We strongly oppose the anti-terrorism bill because it does not guarantee the solution to the problem, but rather provides for violations of rights, in particular of the poor and defenseless. For us and for our partners engaged in mission, the anti-terrorism law is reprehensible", reads the text sent to Agenzia Fides, signed by Sister Maria Ana Rosario G. Evidente, and by Fr. Gregorio Banaga, Provincial of the "Mission Congregation" (Lazarist fathers) in the Philippines
First of all, it is noted that "with such an imprecise definition of terrorism, depending on the interpretation of the police forces - from plotting the assassination of the president to the expression of discontent for legitimate reasons - any political or ideological dissent becomes suspect".
The message also notes a violation of the right to privacy and the broad powers of the new "Anti-Terrorism Council" created in the same provision, which "seem to usurp those of legitimate courts". A suspect can be arrested without a warrant, detained for 14 days; and his goods frozen.
"These measures are certainly against the right to a fair trial", he notes.
There is also the danger of impunity: "We have not forgotten the dark years of martial law and the subsequent abuse of military and police forces against the people, in particular against the poor, indigenous peoples and human rights defenders who have been victims of these abuses", reads the message.
The Vincentians continue: "We call on our legislators and political leaders to remember that it is primarily the Filipinos who must protect, promote and defend human rights in the land and of the population. We pray that they develop laws and policies that guarantee better service to the poor. We do not need the anti-terrorism bill if justice is respected in our country".
"In his day – it reads - Saint Vincent took care of the thousands of poor and hungry refugees caused by the long-lasting war in Lorraine (1635-1643) caused by the policies of Prime Minister Richelieu. To defend the poor, he faced power, which for him was the main cause of their suffering". Following the saint's example, the message invites the members of the Vincentian Families and all men of good will to defend and protect the rights and well-being of people, especially the poorest and most vulnerable, and to protect the common good of the Filipino population . (PA) (Agenzia Fides, 9/6/2020)