ASIA - Migrants in the grip of Covid-19 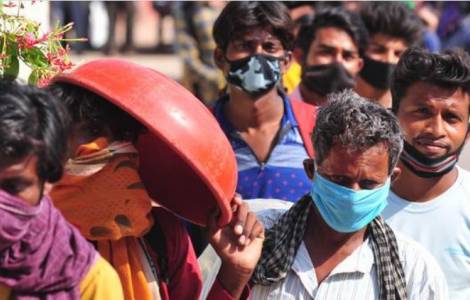 2020-07-18
Abuses of human rights, xenophobia and religious intolerance in Asia: the denunciation of "Franciscan International"

2020-07-11
Environmental disasters and the Church's commitment: the path of safeguarding creation in Central Asia

2020-06-16
Pandemic and children's rights: thousands of children pushed onto the labor market

Bangok (Agenzia Fides) - The suffering condition of migrants has multiplied throughout Eastern Asia, South and North during the Coronavirus period and paradoxically above all in more advanced countries, such as Singapore, Malaysia, Thailand, South Korea. In addition to being far away from families, they are often exploitated at work.
Malaysia and Singapore have distinguished themselves for first ignoring the problem and then concentrating migrants in structures that favored the infection. The city-state, which employs nearly one and a half million migrant workers, has "locked up" about 300,000 of them in about forty dormitories with 10 or 20 people per room. The case with 25,000 positives broke out in April. In early May, Malaysia instead put many migrants in prison with violent police operations and put pressure on journalists who told the story. There are approximately 5.5 million migrants, more than half of whom are undocumented.
Thailand has also distinguished itself for the rather harsh treatment reserved for thousands of illegal workers, locked up in special detention centers as soon as they discovered that their documents had expired or not in order: built to accommodate up to 500 people, they stay in inhumane conditions more than double. Among them the Rohingya, illegal immigrants from neighboring countries and a large group of Pakistani Christians who fled their country for violence or discrimination: people who fled not only to look for work but also because they are in danger of life.
In South Korea, the government has been concerned with finding and tracking undocumented migrants, reporting on their living conditions in crowded and unhygienic places, easy places for new Covid-19 outbreaks. But many of the unregistered migrants do not show up, for fear of expulsion orders. According to Prime Minister Chung Sye-kyun, the approximately 380,000 migrants who illegally reside in the country should receive assistance and medical treatment without worrying about their status or being deported. "If we label them as illegal immigrants and repress them, they will hide, which could lead to a dead end", he said, adding that measures designed for them should be designed with a view to "quarantine" rather than centered on "immigration control".
In the least developed countries, another problem concerns the return home of inter-Asian migrants and the condition of displaced persons: The UN World Food Program provides food and cash assistance to people affected by conflicts, violence and natural disasters and currently has as a target, in Myanmar alone, 245,000 internally displaced persons and people involved in conflicts in the Burmese states: Chin, Kachin, Shan and Rakhine. WFP also supports many migrants returning to their countries: it is estimated that they are about three million, mainly scattered in Asia, now partly on the way home.
In Vietnam, there is the problem of internal migrants: in large cities such as Ho Chi Minh City people flock to the villages, left unemployed in the villages, looking for occasional jobs, often underpaid. A survey, conducted by the Ministry of Labor, shows that the majority of them are aged between 18 and 35 and that six out of ten are women. The survey found that 65% of workers are unskilled workers engaged in occasional jobs and in hazardous environments. Many of these internal migrants do not have a regular employment contract and therefore no social or health coverage. (MG-PA) (Agenzia Fides, 9/6/2020)

ASIA/IRAQ - Chaldean patriarchate: the expulsion of Iraqis carried out by the USA is "Inhuman and immoral"

AMERICA/MEXICO - The Bishops in the face of the current situation: "We are committed to life and human dignity"