ASIA/TURKEY - "I love Turkey". Ten years ago the murder of Bishop Luigi Padovese, "man of communion" 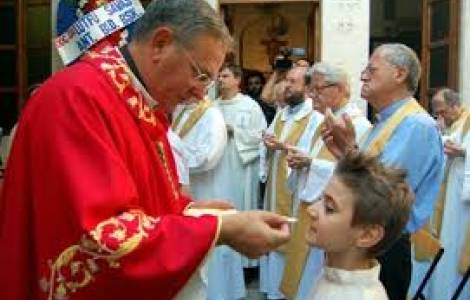 2020-07-01
Ecumenical Patriarch Bartholomew: the conversion of Hagia Sophia into a mosque will sow discord between Christians and Muslims

2020-06-30
Bishop Bizzeti's proposal: to dedicate a road in Iskenderun to Luigi Padovese

2020-06-10
"Egyptian Fatwa" against those who want to re-transform Ayasofya in Mosque. The pronouncement of the Council of State is awaited

Rome (Agenzia Fides) - "Even Luigi Padovese, just like St. John XXIII loved Turkey and loved the Turks". This was underlined by Br. Luca Bianchi ofmCap, Dean of the Franciscan Institute of Spirituality of the Pontifical Antonianum University, recalling the Capuchin bishop, Apostolic Vicar of Anatolia, killed in Iskenderun by his driver on June 3, 2010. Br. Bianchi, today at the helm of the Institute chaired by Padovese for 17 years, he also traced with his personal testimony the figure of his brother bishop, speaking at the commemoration organized online by the Tiber Institute on the tenth anniversary of his violent death. Luigi Padovese - said Br. Luca Bianchi - had a particular love for Turkey, which began long before his episcopal ordination, starting from his passion for apostolic testimonies and for the Church Fathers. "He - remarked Br. Bianchi - defined Turkey as the 'Holy Land of the Church'. Just like Palestine is the Holy Land of Jesus, for him there was a "Holy Land" of the first spread of Christianity. Suffice it to recall that Antioch of Syria, currently in Turkish territory, is the first place where those who followed Jesus were called Christians".
Padovese's passion and ties with Turkey - remarked Br. Bianchi in his testimony - drew on his patristic studies. He had been the main author of the appreciated "Symposia" organized in Ephesus San Giovanni, and of those on St. Paul hosted in Tarsus, Antioch and Iskenderun. High level meetings (Padovese organized 23 of them), were attended by exegetes, theologians and scholars known all over the world, and which for many years represented an important moment also for the local Christian communities. His appointment as Vicar of Anatolia - recalled the Dean of the Franciscan Institute of Spirituality - had also led Padovese to the idea of starting the "Symposia of Anatolia", the first of which was to take place in June 2010, that is, a few weeks after his killing. It would have been an opportunity to confirm and enrich his love for the Fathers of the Church who lived in today's Turkey, who were dear to him, starting from the Cappadocian Fathers and Giovanni Crisostomo, from whom - recalled Professor Bianchi - Padovese had drawn also his episcopal motto "in Caritate Veritas" (the truth in love).
Urged by the questions of Cenap Aydin, Director of the Tiber Institute, Professor Bianchi also outlined the "Franciscan" spiritual traits of Padovese: "It can be said" Bianchi recalled "that he was a man of dialogue at many levels, capable of having friendly relations with all the teachers, even Muslims or non-believers, who attended the symposia. The first dialogue was precisely that on a human level, of seeking truth as a common path. Then, Padovese was also a man of ecumenical dialogue: he was open to the common ecumenical journey with other Christian denominations, he was among the promoters of the symposia of Catholic and Orthodox scholars organized with the Orthodox Theological Faculty of Thessaloniki, and he was also a personal friend of ecumenical Patriarch Bartholomew I, who after his death addressed very beautiful words for him. He was also interested in interreligious dialogue, and forged friendships with many Muslim leaders, such as with Professor Kenan Gürsoy, who was also Ambassador of Turkey to the Holy See. But the word that I would like to use more about him is the word 'communion', which is something more than dialogue. Dialogue is the possibility of relating, communion is the possibility of loving each other within a relationship started by dialogue. Not only to know each other, but also to love each other. And Luigi Padovese, of course, was a man of communion".
Born in 1947 in Milan to a family originally from the Veneto region, Luigi Padovese had entered the Order of Capuchin Friars Minor at the age of 18. Ordained priest in 1973, after obtaining his doctorate at the Pontifical Gregorian University, he became a professor of Patristics and history of spirituality at the then Pontifical Athenaeum Antonianum. In 1987 he became president of the Franciscan Institute of Spirituality, an institution which he had led and "shaped" for 17 years. In 2004 he was elected apostolic Vicar of Anatolia. On June 3, 2010 he was stabbed to death by his driver, 26-year-old Turk Murat Altun. The funeral ceremony, chaired by Cardinal Dionigi Tettamanzi, took place on June 14, 2010 in the Cathedral in Milan. (GV) (Agenzia Fides, 4/6/2020)

AFRICA/GHANA - Covid-19 - For the Bishops: "too many people do not respect the security protocols in the demonstrations for the December vote"

EUROPE/ITALY - Comboni Missionaries: let us contemplate the Heart of Jesus by opening our hearts to the mystery of his love