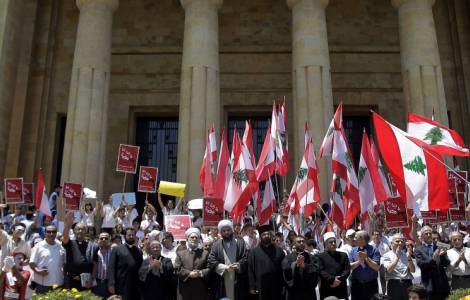 2020-06-27
Ethiopian domestic workers, victims of Covid-19 and the economic crisis

2020-06-04
Confirmation of the National Director of the Pontifical Mission Societies, Fr. Rouphael Zgheib

Bkerkè (Agenzia Fides) - The Lebanese political model, in its historical singularity, represents a heritage to be protected and applied, and not a negative remnant of the past from which to emancipate. This is what Maronite Patriarch Boutros Bechara Rai stressed, taking a position in the debate in Lebanon by the voices of those who, in the face of the economic-political crisis of the Country of the Cedars, return to question the Lebanese institutional system, which also provides for the division of political and institutional positions according to the different denominational affiliations.
In Lebanon, the delicate national institutional model reserves the position of President of the Republic to a Maronite Christian, while the role of Prime Minister must be strictly assigned to a Sunni Muslim, and the office of President of Parliament is reserved to a Shiite Muslim ( which for 30 years has corresponded to the figure of Nabih Berri). The Ta'if agreements, which sanctioned the end of the civil war season in 1989, provided for the numerical parity between the parliamentary seats reserved for Christian and Muslim deputies.
In recent days, in a televised speech held on the occasion of the feast of Eid al-Fitr, at the end of the Islamic month of prayer and fasting of Ramadan, the Shia Sheikh Jafarite Ahmad Qabalan had severely attacked the Lebanese political-institutional system confirmed by the agreements of Ta'if, defining it as a "farm of sects", which ended up increasing corruption and sectarianism, starving the people. The Lebanese system - added the Shiite leader - was created "on a sectarian and tyrannical basis to serve an imperialist and monopolist project".
To the harsh words of the Shiite representative, the Maronite Patriarch replied indirectly, without mentioning him, during the homily celebrated on Sunday 31 May, the solemnity of Pentecost. Lebanon - said Cardinal Bechara Rai - represents a political model that respects all faith communities, without imposing a state religion or a specific religious book as the source of laws and the national legal system. It is a singular model, which must be protected by those who, with the excuse of wanting to correct its defects, actually aim to cancel its fruitful "anomaly".
On Saturday 30 May, celebrating a mass on the occasion of the feast of the Catholic television network Noursat-Télé Lumière, Patriarch Bechara Rai had already remembered that the dream of the founders of Lebanon was to create a "Fatherland for all", where also the different communities of faith could coexist escaping both the religious "monolithism" of Eastern societies and the "undifferentiated fusion" of identities that prevails in Western societies. (GV) (Agenzia Fides, 1/6/2020)