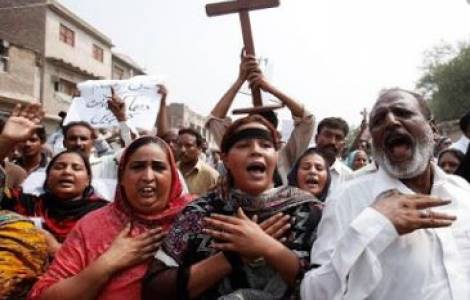 Islamabad (Agenzia Fides) - Episodes of violence against Christian and Hindu religious minorities continue to cause concern in Pakistan and to arouse indignation in civil society. Ironically, violence takes place while the debate on the new Commission for religious minorities, just created within the government, is lively among the institutions. Local and international NGOs, such as Human Rights Watch, currently complain that the Pakistani government has excluded the long-persecuted Ahmadi community from the Commission, believed to be a "sect" by Sunni Islam, and demand that the body is to be truly inclusive. and independent.
As Fides learns, in recent days Protestant Christian Pastor Haroon Sadiq Cheeda and his family were brutally hit and forced to leave the area where they lived, in the city of Rahim Yar Khan, in the Pakistani province of Punjab.
In previous days, seven Muslim armed men attacked the "Pentecostal Trinity Church" in the Kala Shah Kaku area, in the district of Sheikhupura, 56 km from Lahore, capital of the Punjab province. Pastor Samuel Hidayat, speaking with Fides, said: "It was shocking to hear these fundamentalists chanting slogans to burn the church and the Christians living in the surrounding colony. They broke the back wall of the church, the main door and the cross at the entrance". Pastor Samuel adds: "It was a moment of great tension: in order to stop the armed men, I immediately phoned the police and the attackers ran away when they heard the police were arriving. "The police filed the "First Information Report" indicting the men for damage to places of worship and assault.
Haroon Imran Gill, Christian member of the Punjab Provincial Assembly, speaking with Fides, said: "We condemn this attack on the church and Christian groups. It is sad that places of worship and religious minorities are attacked even during this period of lockdown because of the Covid-19 epidemic. The police have stopped two of the attackers, we are asking for justice".
Also in Punjab, a 100-year-old Christian cemetery in Khanewal was attacked by some Muslim men who wanted to misappropriate that land and destroyed many of the graves in the cemetery. With the immediate intervention of a Christian member of the provincial assembly, Ejaz Alam Augustine, the cemetery was saved. Ejaz Alam Augustine, speaking with Fides, informs: "We managed to make the administration have the cemetery enclosed to delimit its borders. Christians are citizens like the others, and have the same rights and the same dignity".
Another disturbing episode concerned Catholic lawyer Khalil Tahir Sindu, a member of the Punjab Provincial Assembly, who has always been committed to the legal defense and protection of the Christian community. His home in Lahore was attacked by four gunmen who fired shots at the house.
If most of the violence against Christians occurs in Punjab, the Sindh province in southern Pakistan is the epicenter of violence towards Hindus, a substantial religious minority in this part of the country. Recently some Muslims from Hala, in Mitiari district, burned the houses of the faithful, beating Hindu men, women and children. In another attack in the Tadados village of Tharparker, 21 Hindu homes were burnt down by militants and many children were injured.
Rahat Austin, a lawyer and human rights activist, told Fides: "Hindus have lived in Sindh for more than a thousand years and are now treated as intruders or inferior beings. Concrete measures are needed by the government to ensure their protection and ensure sustainable living conditions and freedoms".
In its 2018 election manifesto, the Pakistan Tehreek-e-Insaf (PTI) party, now ruling in the country under the leadership of Prime Minister Imran Khan, had promised to protect and promote rights for all religious communities in the country. (AG-PA) (Agenzia Fides, 1/6/2020)